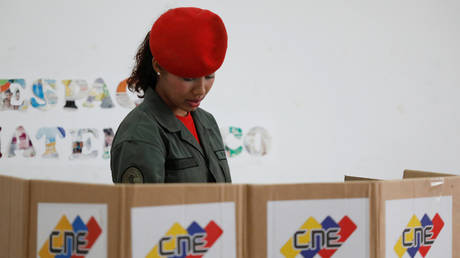 The US has hit Chinese tech company China National Electronics Import & Export Corporation with “Venezuela-related sanctions,” according to the Treasury Department, which issued a license authorizing a winddown of transactions.

The Treasury announced the new sanctions on Monday, without specifying what provoked the measures on the state-owned enterprise. CEIEC trades in a high volume of electronics, including equipment used for military and construction purposes.

“The illegitimate Maduro regime’s reliance on entities like CEIEC to advance its authoritarian agenda further illustrates the regime’s prioritization of power over democratic values and processes,” US Treasure Secretary Steven Mnuchin said in relation to the restrictions.

According to the statement, CEIEC provided software, training, and technical expertise to Caracas, which “was then used against the people of Venezuela.”

Secretary of State Mike Pompeo weighed in on Twitter, scolding CEIEC for “enabling the Maduro regime’s efforts to undermine democracy in Venezuela.”

The U.S. is sanctioning PRC tech firm CEIEC for enabling the Maduro regime’s efforts to undermine democracy in Venezuela. Their support to restrict internet service and conduct digital surveillance against political opponents is robbing Venezuelans of a democratic future.

The Trump administration has been issuing rapid-fire sanctions in what appear to be its last months in power. Last week, the State Department sanctioned four Chinese and Russian companies for supposedly supporting Iran’s missile program. Chengdu Best New Materials Co. Ltd and Zibo Elim Trade Co. Ltd in China, as well as Nilco Group and Joint Stock Company Elecon in Russia were accused of “transferring sensitive technology and items to Iran’s missile program.“

Special representative to Iran and Venezuela Elliot Abrams has urged Joe Biden, who has proclaimed himself the next president, and his future administration to keep up the “maximum pressure” on Iran.