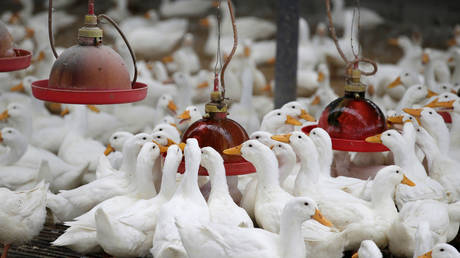 Some 19,000 ducks have been culled in South Korea after a farm was hit by an outbreak of highly pathogenic H5N8 bird flu – the same strain which has afflicted Europe in recent weeks and led to the culling of millions of birds.

The outbreak first took hold on Thursday in the southwestern town of Girin-ri, near the city of Jeongeup-si, the World Organization for Animal Health (OIE) said in an alert on Monday.

Tracing, disinfection and a clampdown on movement are among the actions that health authorities have taken to stem the spread of disease, the OEI said.

In separate measures, the South Korean Ministry of Agriculture said it had also culled 292,000 chickens on five other farms and 100,000 ducks at another site.

News of the outbreak in South Korea comes after another bout of the highly contagious H5N8 strain was reported at a turkey farm in Yorkshire, northern England at the weekend, resulting in the culling of all of its 10,500 birds.

More than a dozen European nations have registered H5N8 outbreaks in the second half of 2020, with Belgium, the Netherlands and Russia among those hardest hit.