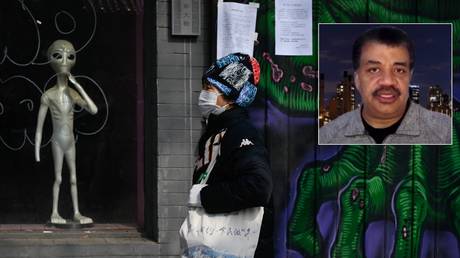 Mankind missed a chance provided by Covid-19 to unite, but there’s still hope the world will come out of the pandemic as a better place, renowned astrophysicist, Neil deGrasse Tyson, told RT’s Going Underground program.

“As much as we divide each other by skin color, religion, sexual preferences…the coronavirus doesn’t care. Coronavirus only cares that you’re human,” Tyson pointed out to host Afshin Rattansi.

I thought that when the coronavirus landed that we would’ve all banded together and say: ‘We’re all human and that’s a common enemy, like an alien invasion. We’ve all seen it in the movies. We got to be together on this one.’ But it didn’t happen to my great disappointment in our species.

The US has become the world’s hardest hit country, with over 13.4 million confirmed Covid-19 cases and over 267,000 deaths, because there’s a “conflict” between those who follow medical guidelines and those who insist that America is the ‘land of the free’ and they can risk their lives if they want to, the scientist explained. And very often the divide is exacerbated as the people on the other side of the debate also have opposite policy views.

“I don’t mind political fights. Political fights are fine when you’re talking about policy and legislation. But you should never have a political fight about…scientific research that has been objectively shown to be true in peer-reviewed journals,” Tyson said, adding that doing so is a “recipe for disaster.”

Policies should be influenced by objectives facts established by science, not the other way around, the astrophysicist said. “The politicians aren’t the experts in medicine. The medical people are…You don’t have to wait for your politician to tell you what to do about that.”

Tyson expressed hope that after Covid-19 is defeated, the world will “pass through some kind of portal” and rethink its readiness to tackle viruses and diseases like cancer; “that we come out on the other side a better world, not one still fighting over who’s going to wear a mask.”