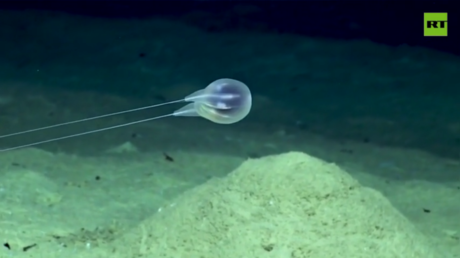 Researchers with the National Oceanic and Atmospheric Administration (NOAA) have identified a new species of ctenophore using only HD footage from a deep sea drone for the first time in history.

The gelatinous marine invertebrate or ‘deep sea blob’ Duobrachium sparksae was spotted by the remotely operated vehicle (ROV) Deep Discoverer off the coast of Puerto Rico in 2015 at a depth of 3,900 meters (roughly 2.5 miles down).

The deep sea drone beamed back eerie footage of the strange blob-like creature, which measures less than a millimeter long, to scientists at the surface.

Though the dive took place in 2015, the scientists wanted to be absolutely sure before claiming the discovery of a new species and took their time painstakingly sifting through footage from the expedition.

Typically, new species classification requires extensive laboratory testing and examinations, something which is extraordinarily difficult with deep sea blobs like D. Sparksae as they do not last long outside the crushing depths of the ocean.

“We don’t have the same microscopes as we would in a lab, but the video can give us enough information to understand the morphology in detail, such as the location of their reproductive parts and other aspects,” explained NOAA marine biologist Allen Collins.

D. Sparksae boasts a balloon-like body from which extend two long tentacles that were observed, in at least one instance, anchoring the animal to the seabed, maintaining a constant depth, which may facilitate feeding in the murky underwater trench known as the Guajataca Canyon.

There are between 100 and 150 known species of ctenophores, aka comb jellies, sea gooseberries, sea walnuts, or Venus’s girdles. Despite their uncanny resemblance, ctenophores are not related to jellyfish, though they are carnivorous, feeding on small arthropods and larvae found in the deep.

Given the extreme environment which this particular sea blob inhabits, researchers are unsure when they might next be able to catch a glimpse of this extraordinary creature.