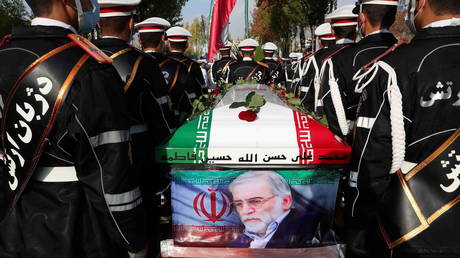 The weapon used in the killing of Iran’s top nuclear scientist, Mohsen Fakhrizadeh, on Friday was made in Israel, Iranian state media claims. Tehran had previously accused Israel of being behind the assassination.

The “remains of the weapon” from the site of the attack outside Tehran bear “the logo and specifications of the Israeli military industry,” an informed source told Iranian English-language broadcaster, Press-TV.

On Sunday, Iran’s Defense Ministry said that it “had a lead” on the identity of the perpetrators and promised an official announcement with details “soon.”

Tel-Aviv has denied any involvement, with Intelligence Minister Eli Cohen saying that he didn’t know who was behind the attack. However, Cohen confessed that he hadn’t shed a tear over Fakhrizadeh’s death, which, according to him, made the world a safer place. “Anyone who takes an active part in creating a nuclear weapon is a dead man walking,” he told Army Radio.

Israel has been blaming Tehran for years of working towards creating a nuclear weapon, while also labeling Fakhrizadeh as the head of the program. Iran insists that its nuclear developments are solely of a peaceful nature.

Press-TV didn’t specify the type of weapons used to target the scientist, only saying that the attack involved “at least one explosion and machinegun fire.”

Several different accounts of the assassination have been circulating in Iranian media. According to one scenario, the operation was carried out by a 12-man commando team, while another claimed that Fakhrizadeh’s motorcade was attacked with a remote-controlled machine gun from some 150 meters away.