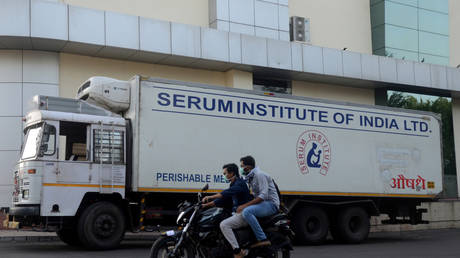 The Serum Institute of India (SII), the world’s largest vaccine manufacturer, has gone on the offensive after a participant in its coronavirus vaccine trial sued the firm, alleging he suffered serious side effects from the jab.

In a countersuit, SII has demanded Rs 100 crore ($13.5 million USD) from the volunteer for his “malicious and misconceived” allegation that Covishield, a version of the AstraZeneca-Oxford University Covid-19 jab, led to a medical episode.

In a statement, the company said it was “sympathetic with the volunteer’s medical condition” but that there is “absolutely no correlation with the vaccine trial and the medical condition of the volunteer.” The Pune-based drug manufacturer stressed that the volunteer was “specifically informed by the medical team that the complications he suffered were independent of the vaccine trial he underwent,” but the individual “still chose to go public and malign the reputation” of SII.

The volunteer, a 40-year-old man from Chennai, claims he suffered severe neurological damage after taking part in the phase three trial of Covishield. He sued SII for Rs 5 crore ($676,000 USD) and demanded SII, AstraZeneca and the Oxford Vaccine Group immediately halt vaccine trials, involving some 1,600 volunteers.

The man reportedly suffered from headaches and vomiting ten days after receiving the jab. He was taken to the hospital after displaying abnormal behavior.

The trial participant was later discharged at his own request. Hospital documents stated he was recovering from “acute encephalopathy,” was suffering from vitamin deficiencies and was suspected of having a “connective tissue disorder.”

A medical official cited by local media said that the man was “now alright” and did not incur any expenses for his time in the emergency ward. The man’s wife claims he has not fully recovered.

In September, SII halted its clinical trials of Covishield after a recipient of the AstraZeneca jab experienced adverse symptoms.

The lawsuit and countersuit come as SII prepares to apply for emergency authorization to distribute and administer Covishield around India.