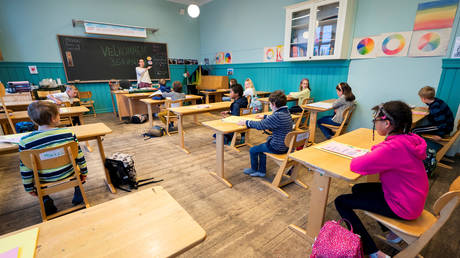 Freedom of speech classes are possible without displaying cartoons of Prophet Mohammed, but educators must be able to decide if they need to do it or not, a Norwegian teacher behind an influential article on the issue told RT.

One in three teachers in Norway were afraid to show the cartoons of Islam’s Prophet Mohammed in class after their French colleague, Samuel Paty, was beheaded for doing exactly that in October, according to a local poll.

Norwegian teacher Kjersti Marie Heldaas, who among other things holds classes on freedom of speech, has confirmed to RT that the results of the survey reflected reality quite accurately.

“After the murder of Samuel Paty, I decided not to show Prophet Mohammed cartoons at all because I felt vulnerable.”

Last month, Heldaas wrote an article in a Norwegian paper on the effect that Paty’s beheading had on her profession. The piece, which attracted a lot of attention, was intended to give teachers a voice and reflect on ways to keep studies effective in the new circumstances.

“I wanted to find other ways to express myself and to achieve the goal with my teaching because the caricature drawings aren’t the goal,” but just one of the examples of materials critical toward religion, she pointed out.

Freedom of speech classes in Norway were always about maneuvering between hate speech law and human rights, allowing for self-expression, Heldaas explained. She said she always started her course with older texts that took a shot at Christianity to make it clear to her students that criticism of Norway’s own culture was possible. Only after that, contemporary materials with anti-religious motives were introduced to the group.

If I wanted I could show the students the [Prophet Mohammed] caricatures… but I find it quite easy to talk about this without actually showing them.

But Heldaas still believes that it’s “really important that teachers all around the world are allowed to make those choices by themselves” and without fear.

Showing Prophet Mohammed cartoons to students is “appropriate if you have a good plan behind it… when you’ve thought about what the goal of teaching is,” she insisted.

Samuel Paty was beheaded last month outside Paris, in what is believed to be a revenge attack carried out by an Islamist extremist. In response, French President Emmanuel Macron pledged to crack down on radical Islam and endorsed the cartoons as an example of freedom of speech. All this led to a massive backlash from majority-Muslim countries.