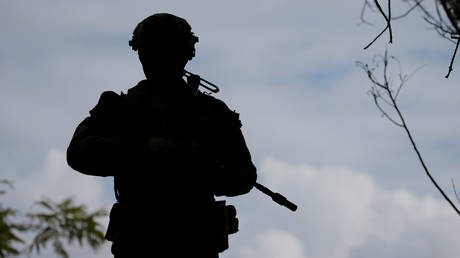 Beijing has rejected calls for an apology after a Chinese official shared a doctored poster of an Australian soldier attacking an Afghan girl, urging Canberra to instead seek forgiveness for its alleged war crimes in Afghanistan.

Australian Prime Minister Scott Morrison demanded an official apology from Beijing after Chinese Foreign Ministry spokesman Zhao Lijian posted a tweet calling for justice over a recent war-crimes report released in Australia – with an illustration of an Aussie soldier holding a knife to a child’s throat.

Shocked by murder of Afghan civilians & prisoners by Australian soldiers. We strongly condemn such acts, &call for holding them accountable. pic.twitter.com/GYOaucoL5D

But Beijing appears to be standing by Lijian. Hua Chunying, who also serves as a spokesperson for the Foreign Ministry, insisted that the Chinese government had nothing to apologize for.

The ministry spokesperson also accused the Australian government of reacting “strongly” to Lijan’s tweet, while not showing similar anger over evidence of a string of unlawful killings in Afghanistan revealed by the recently released report.

Does that mean that they think the cold blood murder of Afghan innocent civilians is justified while other people’s condemnation of such crimes are not justified? Afghan lives matter.

Morrison described the post as a “false image, and a terrible slur on our great defense forces,” and urged Twitter to delete the message. The social media platform instead opted to “hide” the image for some users, adding a warning that the post contains “potentially sensitive content.”

An official four-year investigation that ended earlier this month found “credible evidence” of war crimes committed by elite Australian troops in Afghanistan. The report identified evidence of 39 unlawful killings carried out by Aussie forces in the country. Australian Foreign Minister Marise Payne wrote to her Afghan counterpart and “extended apologies for the misconduct identified by the inquiry, by some Australian military personnel.” Morrison also discussed the report with Afghan President Ashraf Ghani.