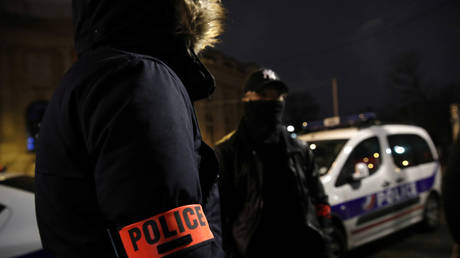 The Paris prosecutor’s office has announced the indictment of the cops accused of beating black music producer Michel Zecler. Three of the four officers will remain detained before trial.

The group are facing accusations they beat Zecler at a recording studio while voicing racial remarks. Footage of the altercation was published online, earning condemnations from activists and even French President Emmanuel Macron, who said the images should “shame us all.”

Prosecutor Remy Heitz announced pretrial detainment for three of the four officers during a press conference on Sunday, to prevent “consultation” between them, as well as potential intimidation of witnesses.

The fourth officer, accused of throwing a tear gas canister into the studio after the other officers were chased out, should be under judicial supervision, Heitz added.

The investigation into the officers’ actions will be handled by an examining magistrate.

The officers are accused of not only assaulting Zecler, but also making false statements, as Zecler’s condition following the incident was explained by allegations that he assaulted the police. Zecler’s lawyer has said camera footage shows this to be untrue.

Heitz said the officers have admitted striking Zecler, but they say it was the producer’s “attitude” that led to the altercation.

The prosecutor also added that the physical response does not appear to be justified and said the officers acted out of “panic.”

The events took place last Saturday in Paris’s 17th arrondissement and reportedly occurred because Zecler was not wearing a mask as required by anti-coronavirus measures.