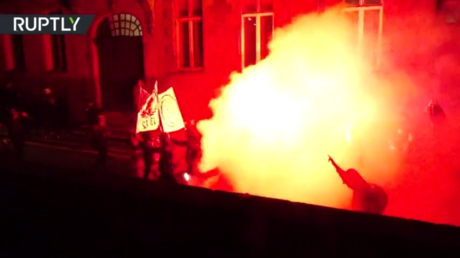 A protest rally in Nantes, which saw crowds denouncing a proposed national security law, has been dispersed by French police. More protests against the controversial piece of legislation are scheduled for Saturday.

The rally was held in the western French city on Friday evening, providing a preview of multiple similar events scheduled for the weekend. Demonstrators carried banners with such messages as “Violence is the last refuge of incompetence” and they chanted pro-liberty and anti-police slogans.

The event initially remained peaceful, though there was a palpable anger among the protesters, according to local media. But later in the night clashes erupted, with riot police deploying tear gas against the demonstrators.

Nantes police said they managed to “limit the damage to the city” and estimated the attendance at up to 3,500. Organizers put the crowd at 6,000-7,000. The police reported making 17 arrests and said nine officers were injured during the clashes.

The national security law, which is yet to be approved by the French Senate, includes a highly debated provision that bans – under penalty of a five-figure fine – the sharing of photos or videos of police officers on duty with the goal of harming their “physical or psychological integrity.” The authorities say it is necessary to prevent doxing and online harassment, but critics say it will likely be abused to punish people for trying to expose police misconduct.

The discontent against the bill was further fueled this week by the publication of a brutal video showing officers beating up and racially abusing music producer Michel Zecler. The CCTV footage was leaked online and sparked nationwide outrage.

Protests against the draft security law are expected on Saturday throughout France. Prime Minister Jean Castex announced on Friday that he would appoint a commission to redraft the contested provision.