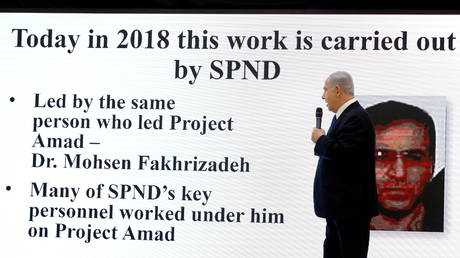 While it remains unknown who is responsible for the killing of top Iran nuclear scientist Mohsen Fakhrizadeh-Mahavadi, commenters on social media are already blaming Israel’s Mossad, with some even theorizing a Trump connection.

Fakhrizadeh-Mahavadi was fatally injured after a reported ambush on his car in Tehran that led to a shootout between unidentified assailants and the nuclear scientist’s bodyguards, local media has reported. Alleged to be the head of Iran’s nuclear program, many have taken to theorizing the Israeli government could have been behind the attack, including Iran’s foreign minister.

Talking heads on social media have taken things further, not only blaming the Mossad intelligence agency for the death, but even theorizing the US could have had involvement based on reports about a reported secret meeting between Israeli Prime Minister Benjamin Netanyahu, US Secretary of State Mike Pompeo and Saudi Crown Prince Mohammed bin Salman this week.

Mossad began trending on Twitter not long after reports of the death emerged.

“So Trump works with Mossad to assassinate an Iranian scientist on his way out the door and there are still a small group of weirdos on here who insist he’s some kind of right wing anti-imperialist,” podcaster Rob Rousseau tweeted.

Others joined in on claiming the US had involvement.

This assassination comes right after Pompeo had a secret meeting in KSA with MBS, Netanyahu, the Mossad Chief, Israeli NatSec Advisor & the Israeli Military Secretary. The WSJ reported they discussed normalization ..and Iran. https://t.co/qjgGALQXR4

Few days ago Netanyahu and Mossad (Israeli intelligence) chief travel to Saudi to meet with Pompeo and MBS.

Must be a coincidence. 👀

Some critics claim the attack proves Israel is the “biggest threat” to peace in the Middle East – if they were involved.

#Mossad assassinated an Iranian nuclear scientist under the guise of stopping a nuclear weapons program that doesn't exist. I believe Israel is the greatest threat to peace in the M.E.

More conservative users have alleged Mossad’s involvement and even celebrated such a scenario.

Mossad going full Munich on Iran’s nuclear bomb builders is so much fun.

Mossad having one helluva month https://t.co/J26tdz70wA

Sen. Ted Cruz (R-Texas) meanwhile pushed back against Israel being “reflexively” blamed for the death, specifically targeting tweets from former CIA Director John Brennan where he said he does “not know” if a foreign government was involved, but he called the alleged assassination a “criminal act” and urged Iran to wait before responding until the US has “responsible” leadership again.

It’s bizarre to see a former head of the CIA consistently side with Iranian zealots who chant “Death to America.”

Israel has not commented on the death of Fakhrizadeh-Mahavadi.