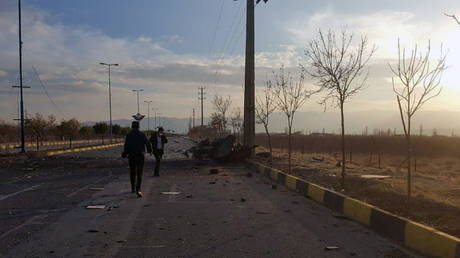 The masterminds and perpetrators behind the assassination of a prominent Iranian nuclear scientist, Mohsen Fakhrizadeh, will face swift revenge, the Iranian military has vowed, as the UN calls for restraint to avoid escalation.

“The terrorist groups and the perpetrators of this hideous act should know that they will face severe revenge,” General Mohammad Bagheri, Iran’s Chief of Staff and a Revolutionary Guards Corps commander, said in a statement in the wake of Fakhrizadeh’s killing.

The general said that the nation’s military “will not rest until the perpetrators of the assassination are found and punished” while calling the incident a “heavy and bitter blow” for Iran’s defense complex.

The UN in the meantime called on Tehran and any other parties involved to show restraint and not to take any rash moves over the incident.

“We have noted the reports that an Iranian nuclear scientist has been assassinated near Tehran today. We urge restraint and the need to avoid any actions that could lead to an escalation of tensions in the region,” said Farhan Haq, a spokesman for UN Secretary General Antonio Guterres.

While no group or state has claimed responsibility for the attack so far, Iranian Foreign Minister Javad Zarif claimed earlier that Israel might have had a “role” in the killing, while blasting the perpetrators as “terrorists.”

Fakhrizadeh, a professor of physics at the Imam Hussein University and the alleged head of Iran’s nuclear program, was ambushed in the city of Absard, just east of the Iranian capital, on Friday. The scientist was injured in an armed standoff between his bodyguards and unidentified assailants, and later succumbed to his injuries in a hospital.

Back in 2018, Israel named the researcher as the supposed head of a nuclear weapons development project dubbed ‘Amad’ (‘Hope’). However, the International Atomic Energy Agency, which monitors Iran’s nuclear sites, said that the ‘Amad’ project was shut down in the early 2000s, while Tehran has repeatedly stated that its nuclear program is for peaceful purposes only.