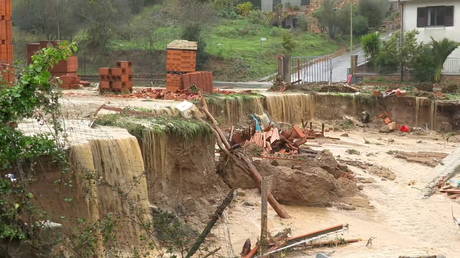 At least three people have died and two more are missing as the Italian island of Sardinia has been battered by storms for two days in a row. The extreme weather has caused flooding and landslides in several areas.

Shocking footage has been posted by residents of the town of Bitti located in Sardinia’s Nuoro province. Roaring floods of mud and water can be seen rushing through the narrow streets of the town, carrying loads of floating debris with them.

After the flood, the town’s streets could be seen covered by a thick layer of mud with damaged cars scattered around the area. The town mayor, Giuseppe Ciccolini, called on residents to exercise “extreme caution” amid heavy rainfalls expected to last until early Sunday. He also ordered some parts of the town to be evacuated. Still, two men and a woman fell victim to the severe flooding in Bitti.

In the nearby town of Galtelli, 150 people have been evacuated, according to its mayor, Giovanni Santo Porcu. Elsewhere in Sardinia, overflowing rivers flooded roads and destroyed bridges. The island has been hit by heavy rains and stormy winds since Friday afternoon. The Network of European Meteorological Service issued a red alert for the island.

Several dams in Sardinia had to discharge water to avoid overflowing. The local authorities urged the residents of nearby settlements to avoid downstream areas. “The Preda and Othoni dam is discharging over 400 cubic meters per second,” one of the statements cited by the Italian media read, informing people that the roads in the area have been closed.

Some towns such as Villacidro located in the island’s south have been partially or completely isolated due to the floods and road closures. The recent events are reminiscent of Cyclone Cleopatra that hit Sardinia back in 2013 and claimed the lives of 18 people.