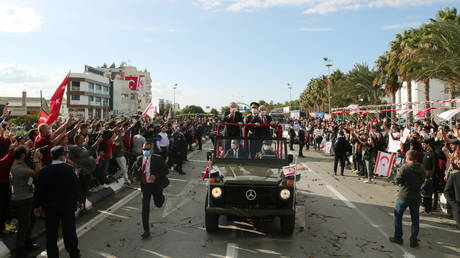 Ankara has denounced a resolution by EU Parliament lawmakers for sanctions against Turkey over Cyprus after President Erdogan’s recent visit to the breakaway Turkish Cypriot state and the reopening of an abandoned town.

“We completely reject the nonbinding resolution… on our country and the TRNC,” Foreign Ministry spokesman Hami Aksoy said in a statement on Friday, referring to the Turkish Republic of Northern Cyprus.

Turkey rejects the charge. Ankara backs dialogue, but Turkey will continue to protect both its own rights and those of the Turkish Cypriots, Aksoy said, slamming the European Parliament resolution.

This decision… once again demonstrates how disconnected from reality and prejudiced the EP is on the Cyprus issue.

The TRNC presidency also said the resolution “ignored the existence of the Turkish Cypriots,” while also “unjustly accusing Turkey.”

On November 15, President Recep Tayyip Erdogan visited the breakaway Turkish Cypriot state, including Varosha, a beach town that has been abandoned in no-man’s land since Cyprus split in 1974. Northern Cyprus recently reopened part of the fenced-off town, allowing public access.

Erdogan said that “a two-state solution must be negotiated on the basis of sovereign equality,” of both Greek and Turkish Cypriots.

The European MPs’ resolution came after Paris, which is at odds with Ankara on several issues, including what Turkey calls “persecution of Muslims” in France, also called for sanctions on Ankara at an EU summit next month. No detailed sanctions have yet been drawn up, but French Foreign Minister Jean-Yves Le Drian said at a French parliamentary hearing this week that “Turkey knows what it needs to do.” The minister warned: “Confrontation or collaboration, it’s up to them.”

Ankara is at loggerheads with Greece and Cyprus over hydrocarbon exploration in disputed east Mediterranean waters, and France supports the two EU member states’ claims.