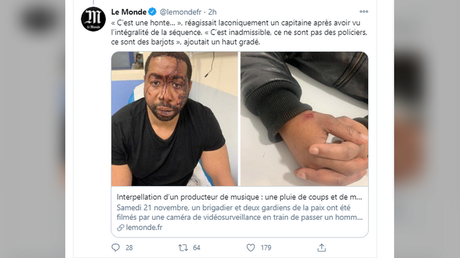 French President Emmanuel Macron reportedly said he was revolted by a video which showed police violence against a black man officers wanted to arrest for not wearing a mask.

The president was “very shocked” by the video of French police brutally beating a black music producer with batons inside his studio in Paris over the weekend, BFM TV reported, citing Macron’s office.

Europe 1 radio quoted an official saying that Macron spoke with Interior Minister Gerald Darmanin and demanded “very clear sanctions” against the officers involved in the incident.

The victim is a producer named Michel Zecler. The officers had followed him to his studio because he was walking outside without wearing a mask, which is illegal during the lockdown. The security camera footage showed how the officers were hitting Zecler with batons multiple times when trying to arrest him. The producer also claimed they used racial slurs. He ultimately spent 48 hours in custody.

The clip of the altercation and a photo of Zecler’s bloodied face have sparked widespread outrage, with people like French football star Kylian Mbappe condemning the “unacceptable violence” and calling for an end to racism.

On Thursday, three officers were suspended following a call by Darmanin to conduct disciplinary action as soon as possible. RTL radio later reported that a fourth officer was suspended for throwing a tear gas grenade in the studio during the arrest.