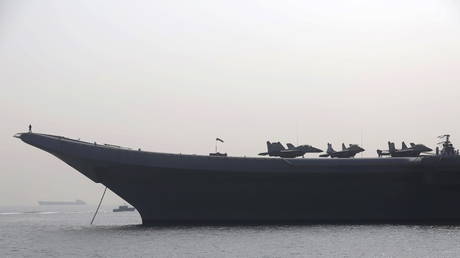 The Indian Navy has confirmed that a MiG-29K trainer aircraft was ditched at sea on Thursday evening. One pilot has been rescued but another remains missing.

A statement released by the navy on Friday verified reports that an accident had occurred during a training exercise on Thursday at 5pm. Two pilots were on board the MiG-29K when it was ditched.

“MiG-29K trainer aircraft operating at sea ditched at about 1700 hrs on 26 Nov 20. One pilot safely recovered, search for the second pilot Cdr Nishant Singh, by air & surface units is in progress. An enquiry to investigate the incident has been ordered,” read the statement published on Twitter.

The Indian Navy has a fleet of over 40 MiG-29K aircraft, both multirole and trainer. They are primarily operated out of Goa and the INS Vikramaditya.

It has been reported by local media that the crash occurred in the Arabian Sea and that the Russian-made MiG-29K was operating from the INS Vikramaditya, India’s only aircraft carrier.

The carrier has recently finished participating in the Malabar exercises, joint naval drills between Australia, Japan, India, and the US, which took place on November 3-6 and 17-20.

During the second part of the naval exercises, which took place in the Arabian Sea, practice operations revolved around two aircraft carriers, the INS Vikramaditya and the American USS Nimitz.

This is the second incident involving an Indian MiG-29K in as many years.

In November 2019, an aircraft crashed after taking off from INS Hansa, a naval air base in Goa, due to a bird strike. Both pilots ejected safely.

In January 2018, a MiG-29K veered off the runway at INS Hansa, but both pilots escaped unharmed.