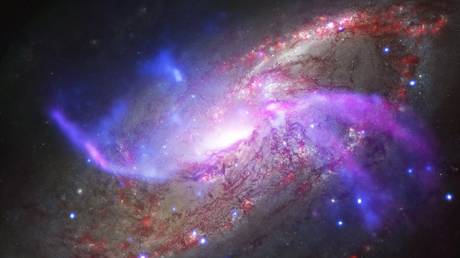 As if 2020 wasn’t ‘unprecedented’ enough, astronomers have learned that Earth is actually 2,000 light years closer to the Sagittarius A* supermassive black hole at the center of the Milky Way galaxy than was previously thought.

On top of that, our solar system is also hurtling through space at seven kilometers per second faster than scientists had calculated.

The stellar revelations are thanks to a new and improved map of the Milky Way, published this week and based on observations collected from a Japanese astronomy project over the last 15 years, coupled with other recent data.

One light year equals 9.5 trillion kilometers, so while it may initially sound as if the end is nigh, scientists have stressed that there really is no cause for alarm over Earth’s replotted proximity to Sagittarius A*.

Rather than spelling impending doom, the new modelling allows scientists to pinpoint the location of Earth within the galaxy to a greater degree of accuracy.

Our freshly plotted Milky Way is the result of observations from telescopes across Japan, which form the radio astronomy project ‘VERA’. Established in 2000, VERA stands for VLBI (Very Long Baseline Interferometry) Exploration of Radio Astrometry.

The project uses the ‘interferometry’ technique to combine data from multiple telescopes across Japan, creating a super-sharp resolution of 10 micro-arcseconds – in other words, focused enough to spot a coin on the surface of the moon.

The National Astronomical Observatory of Japan on Thursday revealed that its own astronomers, along with other groups, had generated a “position and velocity map” which they used to calculate the center of the galaxy.

This galactic center, the astronomers said, is 25,800 light years from Earth – around 2,000 light years closer than the International Astronomical Union’s official distance of 27,700 light years, which it settled on in 1985.

And as 2020 continues moving at breakneck speed, the new map also led astronomers to find that the Earth is actually orbiting the center of the Milky Way at 227 km/s, rather than the slower official speed of 220 km/s.

Researchers at VERA are now attempting to create more detailed maps of the area close to the central supermassive black hole, using telescope data from Japan, South Korea, and China.