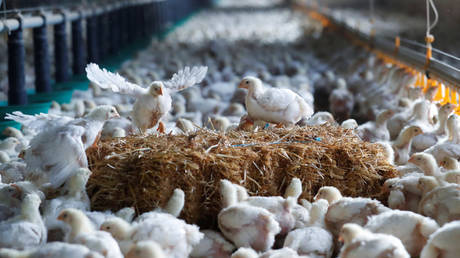 A Belgian chicken farm reported Europe’s latest outbreak of highly infectious H5N5 bird flu on Friday, the World Organization for Animal Health (OIE) said in an alert. Thousands of birds have been culled as a precaution.

Some 600 birds died from the virus, while a further 151,000 were culled after the outbreak, which struck in West Flanders near the town of Menen, on the France-Belgium border.

Bird flu began spreading at the farm on November 18, before the outbreak was confirmed on Wednesday and reported on Friday, animal health officials said.

In a bid to stem the spread of infection, the affected area was disinfected, while other measures – including tracing and the destruction of animal products – are also to be implemented, the OIE said.

On Friday, Norway also reported a bird flu case, making it the latest country to be hit after Croatia, Poland and Slovenia, which all reported their first outbreaks.
Norway’s outbreak is of the H5N8 strain, which is also highly pathogenic and has been the main type of bird flu to hit Europe this year, although H5N5 and H5N1 have also been recorded.

Millions of birds have been destroyed as bird flu has ripped across the continent since summer, including in Denmark, France, Germany, Ireland, Israel, Kazakhstan, the Netherlands, Russia, Sweden and the UK.

One of the hardest-hit nations, the Netherlands, has slaughtered hundreds of thousands of its chickens in November alone.

Most cases of bird flu across Europe have been reported in wild birds, but recent outbreaks on farms have resulted in more than 1.6 million chickens and ducks being culled.