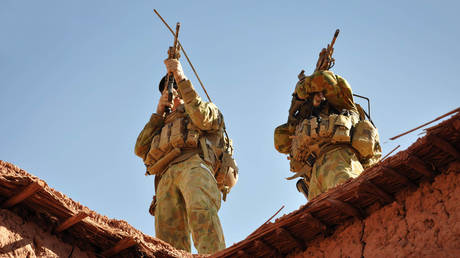 The Australian Army said 13 servicemen are facing dismissal and could be referred to the special prosecutor’s office set up to study allegations in a report about commandos executing prisoners and civilians in Afghanistan.

“At this time, 13 individuals have been issued administrative action notices in relation to the Afghanistan inquiry,” Chief of Army Lieutenant General Rick Burr announced. He explained that the servicemen in question have at least two weeks to respond to the notice, which includes a proposal to sack them.

Burr said the army would then study the written responses from the servicemen and consider “individual circumstance” on a case-by-case basis. He added that the soldiers could be later referred to the office of the special prosecutor, which was created to examine the possible prosecution of troops over their conduct in Afghanistan.

The army did not disclose the names of the soldiers. According to Australian media, the servicemen are from the 2nd Squadron of the Special Air Service Regiment, which was disbanded shortly after the redacted version of the report on Afghanistan was published this month, and the unit’s 3rd Squadron.

An official four-year investigation found evidence that elite Australian troops unlawfully killed 39 prisoners and civilians during their service in Afghanistan. The shocking details prompted the Australian government and the army to apologize to Kabul and the people of Afghanistan.

In 2001, Australian troops joined the US-led NATO force to fight Al-Qaeda and the Taliban militants in Afghanistan following the 9/11 terrorist attacks in the US.