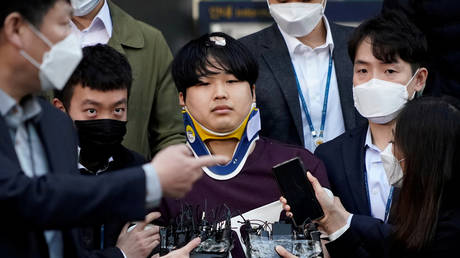 The 25-year-old leader of an online sexual blackmail ring was sentenced to 40 years in prison in South Korea after being found guilty of coercing at least 74 women, including 16 minors, into providing sexual imagery of themselves.

Cho Ju-bin, convicted on Thursday, was the head of one of the largest online blackmail operations in the world. Prosecutors initially sought a life sentence for Cho, calling his crimes “unprecedented in history.”

“The defendant lured and threatened multiple victims in various ways to produce pornography, and distributed it for a long time to many people,” the judge said of Cho’s modus operandi, according to the Yonhap news agency, adding, “He in particular inflicted irrecoverable damage to many victims by publishing their identities.”

In what authorities described as “virtual enslavement,” Cho was forcing his dozens of victims to share increasingly explicit, degrading and sometimes violent sexual pictures and videos of themselves. The criminal, going by the online nickname ‘baksa’ (Korean for ‘doctor’), was then distributing the material to the members of his chatroom, ‘Baksabang,’ on the messaging app Telegram.

Cho’s ‘Baksabang’ associates were sentenced to jail time from seven to fifteen years.

The ‘doctor’ had been practicing since May 2019 until February this year, and was sentenced by the Seoul Central District Court for violating criminal and child protection laws, Yonhap reported.

“Thank you for putting a brake on the life of a devil that could not be stopped,” the young criminal mastermind said of his own 40-year-sentence, adding, “I apologize to those who were hurt by me.”

Besides getting decades of prison time, Cho was also fined 10.64 million Korean won ($9,600), and will be wearing a monitoring ankle bracelet for 30 years after being released.

Cho’s high-profile case sparked nationwide outrage, with citizens urging authorities to prosecute not only the ‘Baksabang’ organizers, but also the network’s customers, who collectively paid 1.5 million won ($1.360) for the illegal sexual content. The final verdict has received mixed reaction from the public, with some praising its harshness, and others arguing the punishment was not hard enough.