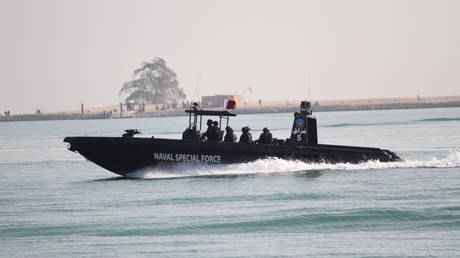 Three Qatari coastguard vessels stopped two boats belonging to their Bahraini counterparts, the latter’s Interior Ministry has said. The move comes amid an ongoing blockade of Qatar by Arab states.

The incident happened on Wednesday afternoon local time, when Bahraini coastguard boats were returning after taking part in maritime exercises in the Arabian Sea, according to the ministry. It added that three patrols of Qatar’s Coastal and Border Security Forces were involved.

However, the Bahraini boats were then allowed to leave and continue their movements, the statement said.

The ministry described the move as “inconsistent with the Gulf security agreement” between the six-member Gulf Cooperation Council (GCC), as well as with “conventions and treaties related to the international law of the sea.”

Bahrain will notify the GCC, the ministry said, and expressed hope that such an event would not be repeated.

The incident comes after signs of progress recently emerged in talks on ending a three-year blockade of Qatar by Arab states. In 2017, Bahrain, the United Arab Emirates (UAE), Saudi Arabia and Egypt imposed a boycott on Qatar, and severed diplomatic and transport ties with Doha, after accusing it of supporting “terrorism.” Qatar has denied all the allegations.

Saudi Arabian Foreign Minister Prince Faisal bin Farhan Al Saud said late last week that Riyadh is seeking a way of resolving the three-year rift. However, he added that the end of the blockade depends on addressing security concerns.

The US State Department’s top diplomat for the Middle East, David Schenker, cautiously predicted in September that progress may be made within weeks in the talks to end the blockade.

In September 2017, Bahrain also accused Qatar of seizing three boats with 16 sailors on board. That seizure raised to 15 the number of boats seized, and the number of sailors in Qatari custody to 20, Bahraini officials said. They dated some of the boat seizures back to 2009.