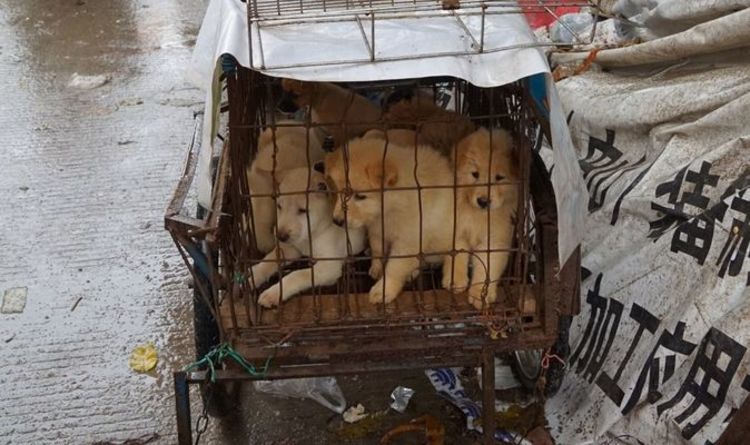 Witnesses said the unscrupulous vendor planned to turn the dogs, including five puppies, into grab-and-go meals falsely labelled as lamb or beef dishes. Local residents said the man was well-known for killing and cooking dogs in their neighbourhood of Zhengzhou in Henan Province.

According to one of the people who rescued the dogs, the filthy yard in which they were found was part of a kitchen facility run by the man who “kills dogs around the year”.

One of them said neighbours told them the vendor, who admitted not having a license to run a food stall, stole dogs every night and put them on the menu the following morning.

They said local officials who were called to the scene told the man to write a letter promising never to kill dogs again before letting him go without further action.

Animal welfare activists are pushing the Chinese authorities to bring in laws against animal abuse.

The Chinese cities of Shenzhen and Zhuhai have already banned eating dogs and cats in the wake of the coronavirus pandemic.

The Chinese Ministry of Agriculture and Rural Affairs is considering banning dog meat nationwide after classifying dogs as companion animals instead of farm animals but no official directive has been issued yet.

China has laws to protect land-based and aquatic wildlife but there is no other animal welfare legislation.

And the country still celebrates its fondness for dog meat with the annual Yulin festival despite growing calls for it to be banned.

The 10-day event usually sees as many as 15,000 dogs slaughtered, cooked and eaten by hungry festival-goers.

Merchants from all over China travel to the northern city of Yulin to sell dogs and cats for the meat market.

The animals are transported live in cramped cages.

The market for cat-meat for human consumption in China is estimated to be worth £4m.

The dog-meat market is even more lucrative with an annual turn around of an estimated £10m.

Supporters of the annual event rejected calls for it to banned and urged Beijing to protect their rights to eat dog.

“Otherwise you cannot stop others from passing laws to forbid the consumption of other animal meats, such as pork and beef.”

Some even suggested the animal rights activists demanding a ban on the Yulin festival were part of an anti-Chinese plot by foreign forces to smear the country over its links to the outbreak of coronavirus last December.