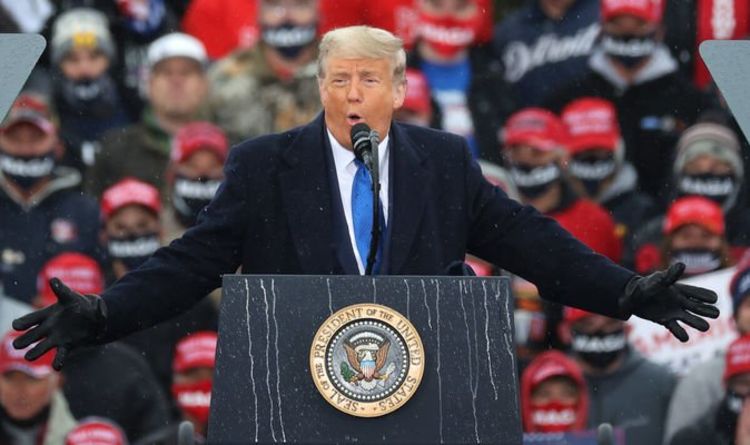 Professor John Antonakis, has used the same forecasting model he adopted in 2016, when he correctly predicted Donald Trump would defy all the polls and beat Hilary Clinton. The professor of Organisational Behaviour Lausanne University in Switzerland, based his forecast using a range of variables, including economic conditions, time in office and character traits.

His analysis found little to split Mr Trump and Mr Biden in terms of economic numbers alone – with the Democrat nominee taking a slight edge.

However, further number crunching found President Trump has a significant advantage, as he is running for a second-term in office.

The polling model found a candidate seeking a second term, when the party has been in office for less than eight years, has the odds stacked firmly in their favour.

According to the model, Mr Trump also trounces his rival when it comes to levels of charisma.

Analysis of their party conference acceptance speeches, found in Mr Trump’s speech, 55 percent of each sentence was charismatic, compared to just 52.01 percent per sentence for Mr Biden.

Professor Antonakis developed the model along with fellow behavioural and leadership expert Professor Philippe Jacquart from the Emlyon Business School in France.

The pair of academics based their model on the successful Raymond Fair model which was created at Yale University in 1978.

The famous equation took into account four major assumptions, they include; incumbent President’s having an advantage, voters like change (parties over two terms have a disadvantage), a slight persistent bias towards Republican candidates and the state of the economy.

He said: “But all is going to depend on what happens in this third quarter.

“If there is contraction in this third quarter, which is unlikely, but if GDP growth is quite limp then Biden will do it.”

The election on November 3 is like no other due to the coronavirus pandemic, and as a result Professor Antonakis has urged caution with his prediction insisting it is presented with “humility” amid the “fog” caused by the virus.