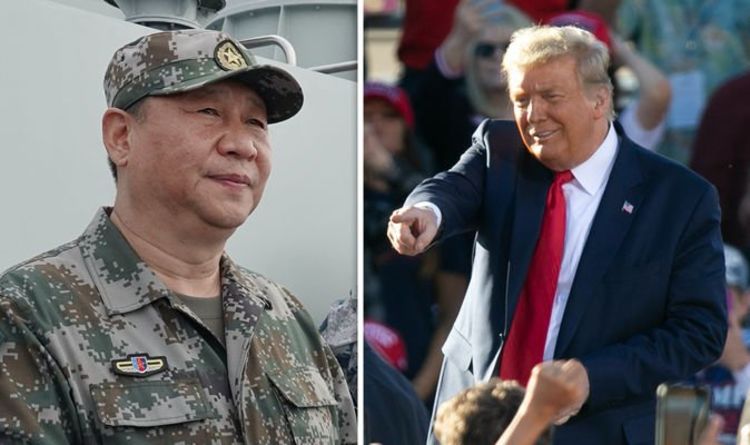 Beijing’s defence ministry has said Washington has rubbished reports it is planning a drone strike on disputed Chinese territory in the South China Sea. Both nations have commenced talks over the rising tensions in the contested waters, with military chiefs meeting over video conference over the last two days. Recently both China and the US have ramped up their naval presence in the South China Sea, with Beijing launching its second aircraft carrier and the US holding live fire drills with allied countries near the waters.

The spokesman said Mark Esper, US Defence Secretary, has denied reports the US was planning any such attack on Beijing-held islands in the South China Sea.

He added Mr Esper stressed Washington has no intention of launching a war with China, but Mr Wu added Beijing was prepared to respond if provoked.

Mr Wu said: “We urge the US to walk the talk, keep its promise, and take measures to prevent provoking China military in the air and sea.”

Mr Wu added his hopes the US and China’s militaries can both strengthen relations between Beijing and Washington after they agreed to better communication and cooperation in areas of common interest.

Senior officials from the US Army and People’s Liberation Army are set to speak again in November and December to discuss humanitarian efforts and maritime security.

The reports of a US-ordered drone attack came from Chinese media outlets.

They claimed US military personnel showed off a simulated island assault exercise with Chinese silhouettes featured in the exercises.

China’s warnings to the US come after Washington has become increasingly involved in the contested region, throwing support behind allied countries.
On Monday, the US approved the sale of 100 Harpoon coastal defence systems to Taiwan for $2.4 billion, after previously approving three weapons sales for $1.8 million earlier this

Mr Pompeo also hit out at Beijing earlier this month during a meeting with Japanese, Australian and Indian officials.

The Quadrilateral Security Dialogue meeting saw the US official call for protection against “the CCP’s exploitation, corruption, and coercion” in the South China Sea and other areas.

The PLA also launched their second ever aircraft carrier Shandong this week, marking the first domestically built ship of its kind in the Chinese army.

It will join the Southern Theatre Command and is set to serve as a combat deterrent in the South China Sea while carrying out routine navigation exercises, as per state media outlet the Global Times.

The outlet also reported the ship will be fully combat ready by the end of the year, with China planning to add four more aircraft carriers to its arsenal.