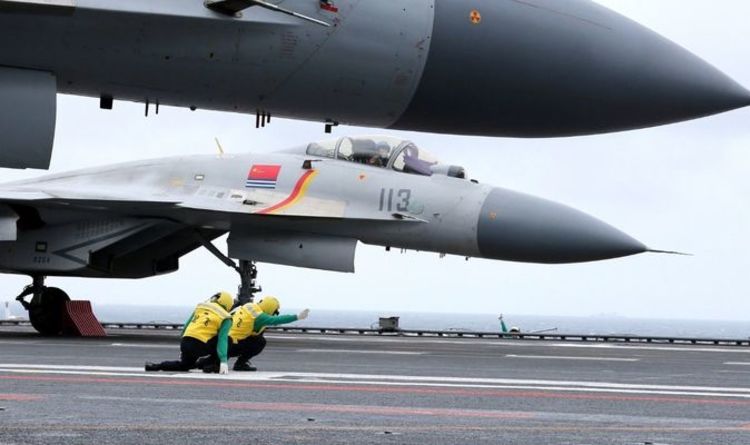 The emergency meeting came as US Defence Secretary Mark Esper and Secretary of State Mike Pompeo urged Asian countries to co-operate with Washington in confronting security threats posed by China. A furious Beijing accused the US of having Cold War mentality and zero-sum mindset.

Mr Wu said Mr Esper had denied media reports that the US was studying a plan to attack Chinese islands and reefs in the South China Sea using an MQ-9 Reaper drone.

The defence ministry spokesman said Mr Esper had made it clear the US “has no intention of creating a military crisis with the Chinese”.

He said: “We urge the US to walk the talk, keep its promise, and take measures to prevent provoking China military in the air and sea.”

He warned China would “resolutely counter-strike” if provoked by an attack at sea.

Mr Wu said both militaries planned to exchange views via video conferencing on humanitarian aid in mid-November and on maritime security before the end of the year.

The Pentagon did not say if Mr Esper specifically took part in the talks but said they were an opportunity to create principles to “prevent and manage crisis and reduce risk to forces.”

A spokesman said: “The two sides agreed on the importance of establishing mechanisms for timely communication during a crisis, as well as the need to maintain regular communication channels to prevent crisis and conduct post-crisis assessment.”

The ultra-nationalist paper suggested Donald Trump wanted to boost his election chances by creating a military conflict with the Chinese but warned the US would pay “a heavy price” if it were to launch any sort of drone attack on Chinese held possessions.

The Global Times said: “We must warn the US side that attacking China’s Nansha Islands or other Chinese targets using MQ-9 Reaper drones is an act of war.

“The Chinese People’s Liberation Army will surely fight back, causing the US military to pay a heavy price.”

Chinese leader Xi Jinping claims his nation has a historic right of ownership to almost the entire South China Sea.

This is demarked by the “nine-dash line” that encircles the mineral and resource-rich maritime area.

The claim has been objected to by nations that surround the South China Sea.

The Philippines, Vietnam, Malaysia, Taiwan and Brunei have claims to the sea they say China is encroaching upon.