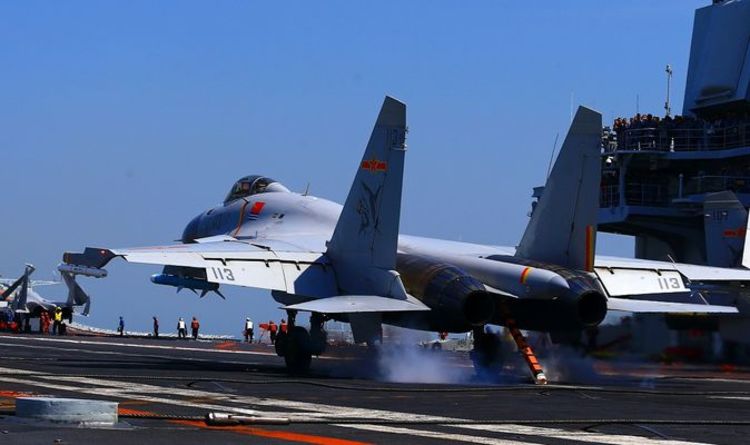 The footage was shared by China Central Television this week. Analysts say the ship has now achieved “basic fighting capacity” after being commissioned late last year. One Chinese military commentator said the ship could be used as a deterrent to ‘gangsters’ in the South China Sea.

The video shows the Shandong, also called Type 002, involved in military training as fighter jets take off and land on the huge vessel.

It can carry as many as 44 aircraft for the PLA’s air force, including fighter jets and helicopters.

Altogether, the ship can require more than 2,500 sailors to keep it operational, according to military news site Navy Recognition.

Li Jie, a military expert based in China, told the country’s state news outlet Global Times the ship appeared to have made quick progress in in training.

The commentator added: “This will deter the gangsters effectively.”

In addition, the ship is believed to be armed with short-range HQ-10 missiles, a seven-barrelled 30mm gun with a 3km range, and more.

The Shandong is China’s second aircraft carrier after its sister ship the Liaoning.

This month marked the fifth time this year in which Australia, Japan, and the US conducted joint military operations in the 7th Fleet area of operations.

The US Navy said in a statement: “Throughout the naval exercises, participants trained together and conducted trilateral operations designed to increase the allies’ collective ability to maintain maritime security and readiness to respond to any regional contingency.

“Professional engagement and cooperation with allies and partners is the foundation of regional stability, which fosters peace and prosperity for all nations.”

Captain Yokota Kazushi, commander of Japan’s escort division eight, said: “For the regional peace and stability, we are making efforts to maintain and develop a free and open Indo-Pacific. The iron bond with our partners is its foundation.

“Even though COVID-19 spreads, the JMSDF continues to strengthen the relationship with our ally partners.”