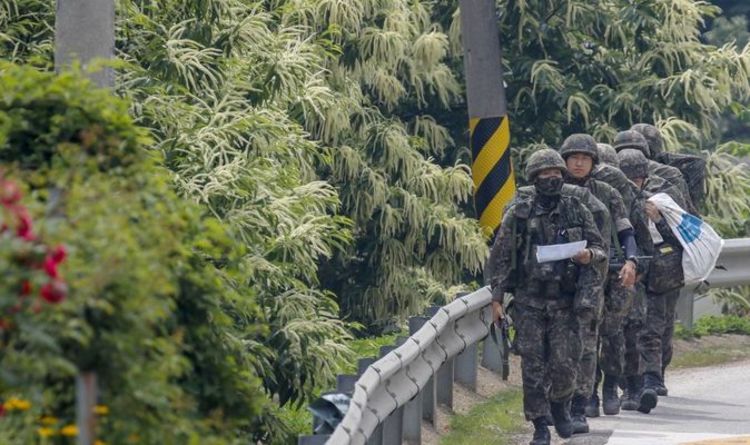 The soldier, believed to be in his early 20s, shot his unit commander with an automatic rifle while he was on patrol with the Storm Corps along the border in Jongsong, North Hamgyong Province, on October 22. He then reportedly fled and “left his rifle in the sentry box”. Local reports say he had “built up resentment” after harsh treatment from his commander.

The commander was said to have treated the soldier “like a servant”.

He would beat him and force him to wash the commander’s underwear and socks, reports claim.

A source said he “did these things even in view of other soldiers”.

Other members of the unit claimed the soldier was “angered by what had happened on the day of the incident”.

Now North Korean authorities are struggling to find the soldier after he fled.

A source told Daily NK: “Given the circumstances at the time, they didn’t believe he had escaped across the border, so they thought they could capture him in 24 hours by intensifying the alert status of soldiers nearby.

“But they couldn’t find a single clue to his whereabouts.”

North Korean authorities quickly sent out an alert along the entire border of North Hamgyong Province.

“Only after realising that the soldier may have crossed the border did the authorities belatedly order the border in those areas sealed.”

Members of a General Political Bureau inspection team have also been dispatched to the Storm Corps unit to investigate.

The General Political Bureau said they sent the Storm Corps to the area to protect the border.

But it added the inspection team sees the area as a “lawless zone”.

They added the survival training of members of the Storm Corps is “so good they are difficult to catch if they flee into the mountains or cross into China”.

The source also said Ministry of State Security officers have been visiting border guard units near to the Storm Corps unit.

This is to tell them to “take measures to prevent shootings and illegal border crossings”.