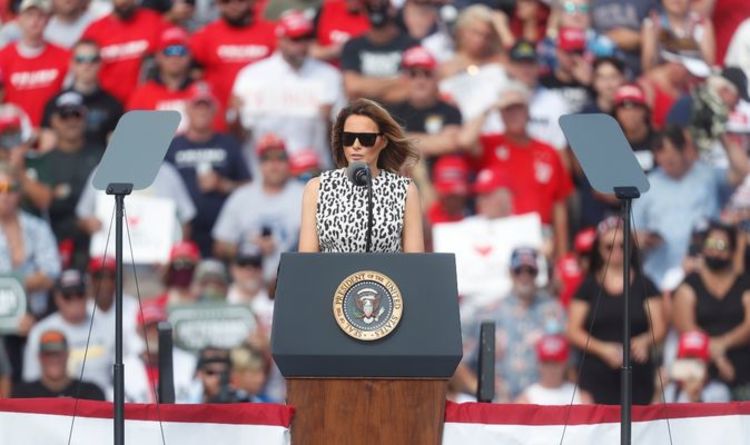 The First Lady walked on stage to support her husband, the President of the United States, as he addressed the crowds at a campaign rally in Florida. During the rare appearance, Ms Trump also gave a speech in which she maintained Mr Trump’s accusations against the media.

But what surprised many was how seemingly uncomfortable the couple’s interactions were after a video emerged of them greeting each other.

In the video, Mr Trump is seen pulling the First lady closer to him as she remains distant.

He also kisses her on both cheeks multiple times as she pats his arm.

The strange interaction caused some people to refer to a conspiracy theory that claims the First Lady uses a body double to stand in at some events.

Some even suggested the President also looked different and that he may have hired a body double too.

One Twitter user wrote: “I see this video, and kind of get the “body double” conspiracy.

A second person said: “Either she hired a stunt double or that’s Boris Johnson.”

Another user added: “Yes. You know it’s true love when your wife refuses to kiss you on the lips, and lives separately from you!”

However, other users praised the couple and the “affectionate” moment.

One user said: “Love this and them.

“I like that they are not constantly doing PDAs, you can just tell they are private and they are best friends!”

Another person added: “Such a beautiful moment.

“We need Love in our country again, and it can happen if everyone sees that our president LOVES the USA.”

Speaking to CNN, she said: ”Once again, we find ourselves consumed with a ridiculous non-story when we could be talking about the work the first lady is doing on behalf of children.”