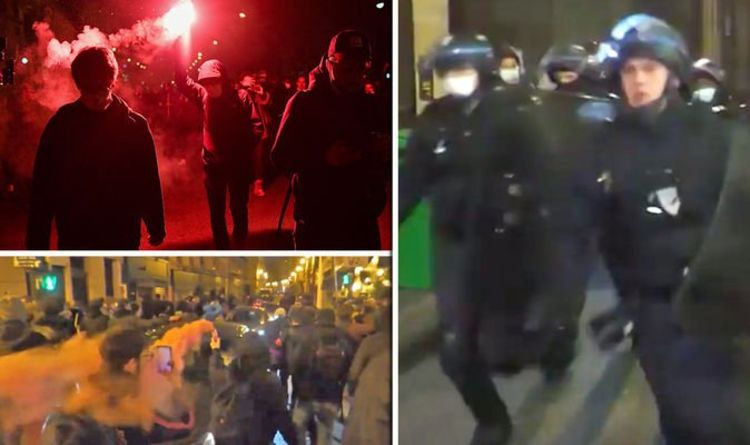 Emmanuel Macron faces a revolt among the French after his second sweeping national shutdown order sparked outrage. There is growing concern among Mr Macron’s team that the new lockdown order will spark protests on the streets. Last night, hundreds took to the street to denounce the lockdown order, leading to clashes with riot police.

Protesters were heard chanting slogans against the lockdown, as some hurled fireworks, flares and rubbish bins along the march.

Riot police responded to the protester violence by unleashing tear gas on the crowd in an attempt to scatter demonstrators.

Similar protests were held in the cities of Castres and Toulouse, where demonstrators were also heard chanting against Mr Macron’s presidency.

Last night also saw astonishing traffic jams around Paris, as tens of thousands of people tried to flee the French capital for the countryside before the lockdown order came into effect.

JUST IN: France in CHAOS as thousands flee gridlocked Paris ahead of lockdown

Videos posted on social media showed huge queues of Parisian cars attempting a mass exodus out of the city.

Panic-buying in French supermarkets was also widespread last night as French residents prepared for a month of confinement in their homes.

Mr Macron announced the new month-long national lockdown on Wednesday, which came into effect from midnight on Thursday.

Unlike the first lockdown, schools in France will largely remain open around the country.

He admitted that recent efforts to contain the virus such as night-time curfews were “useful, but not enough”.

To date, the country has recorded over 1.3 million infections and some 36,000 fatalities, according Johns Hopkins University.

France follows Italy and Germany in reviving their lockdown policies amid a spike of new infections across Europe.

Similar anti-lockdown violence and protests erupted in Rome and other major Italian cities in the past week.