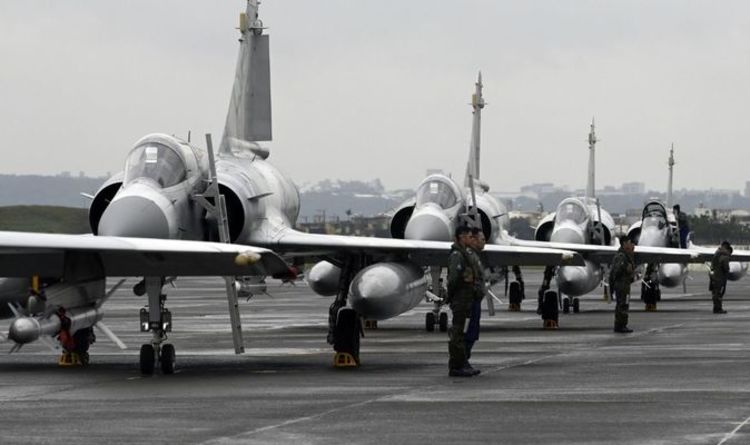 The self-ruled democratic island is buying 100 Harpoon Coastal Defence Systems and up to 400 surface-launched missiles worth a total of around £1.83bn. The weapons are capable of reaching the Chinese mainland across the 100-mile-wide Taiwan Strait. Earlier this week Tapei announced it was buying US-made SLAM-ER missiles in a deal worth just under £1billion.

The arms deals have enraged Beijing and come a Chinese Communist Party leaders vowed to promote Taiwan’s reunification with the mainland and peaceful cross-straits development.

China regards Taiwan as a renegade province to be brought back under its sovereignty by force, if necessary.

Chinese Ministry of National Defence spokesman Ren Guoqiang said the US had to halt arms sales to Taiwan and warned it was risking peace and stability in the Taiwan Strait.

Mr Ren described Washington’s repeated sanctioning of arms sales to Taiwan a “severe violation of the One-China principle and the China–US Three Communiqués” which form the basis of Washington and Beijing’s understanding of Taiwan’s political status.

“China urges the US to handle Taiwan-related issues prudently in order to avoid dire consequences for state-to-state and military-to-military relations between China and the US.”

He said China’s People’s Liberation Army had the “resolve, confidence and ability” to defeat foreign interference of any kind and any attempts at “Taiwan independence” separatism.

Chinese state media has responded to the arms sales by calling for warplanes to “fly over the island of Taiwan” and declared any retaliation from the Taiwanese government “means war.”

In a fiery editorial he said: “The fighter jets of the People’s Liberation Army (PLA) must fly over the island of Taiwan to declare national sovereignty and show the determination to exercise the Anti-Secession Law.

“This is the firm step the Chinese mainland needs to walk in a bid to lock down ‘Taiwan independence’ tendencies.

Mr Hu said: “We should not indulge the US in selling weapons to Taiwan.

“They should pay the price for buying US weapons, particularly offensive weapons.

“The PLA should warn them that it will destroy those newly purchased weapons.”

The Chinese foreign ministry said the country will take necessary measures to uphold its sovereignty and security interests in the wake of the arms deal.