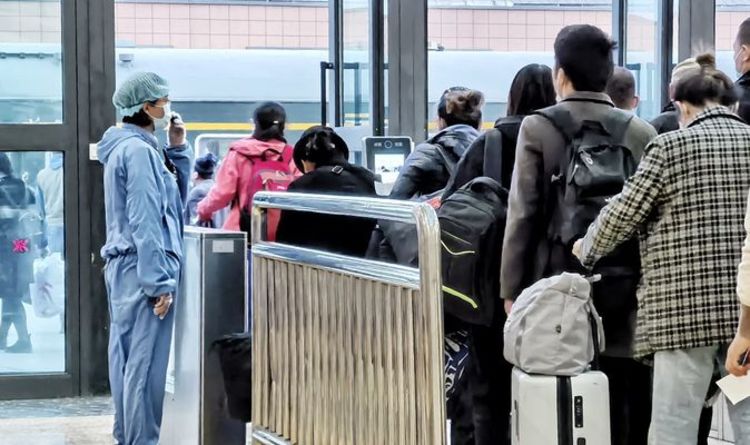 The factory was set up by Beijing in a bid to help locals out of poverty, an investigative report revealed. However, experts have denounced the “poverty alleviation” scheme, labelling it as “coercive” and saying it often leads to forced labour.

The coronavirus wave was registered on Saturday in the Kashgar region with more than 180 people contracting the disease.

The factory that the outbreak was linked to is located just outside the city of Kashgar, according to Chinese news outlet Caixin.

Local sources who spoke to Caixin described the factory as “densely packed” with workers from local villages.

The “patient zero” of the outbreak, a 17-year-old girl, as well as her parents tested positive for the virus.

He said: “This is a village factory that is part of the scheme to put all adult Uighurs and related minorities into low-skilled factory work as part of poverty alleviation.

“Clearly, ‘industry-based poverty alleviation’ is not voluntary but mandatory.

“Those who resist being ‘alleviated’ from their poverty are subjected to ideological education so that their thinking aligns with the state’s goals.”

“Based on the evidence put forward during the Subcommittee hearings, both in 2018 and 2020, the Subcommittee is persuaded that the actions of the Chinese Communist Party constitute genocide as laid out in the Genocide Convention.”

The Canadian group also called on the international community to condemn China for its actions.

It wrote: “If the international community does not condemn the human rights abuses in Xinjiang province by the Government of China, a precedent will be set, and these methods will be adopted by other regimes.

“Complacency is entrenched by a lack of access to Xinjiang; by the lack of free press; and through the silencing and harassment of Uighurs living abroad.”