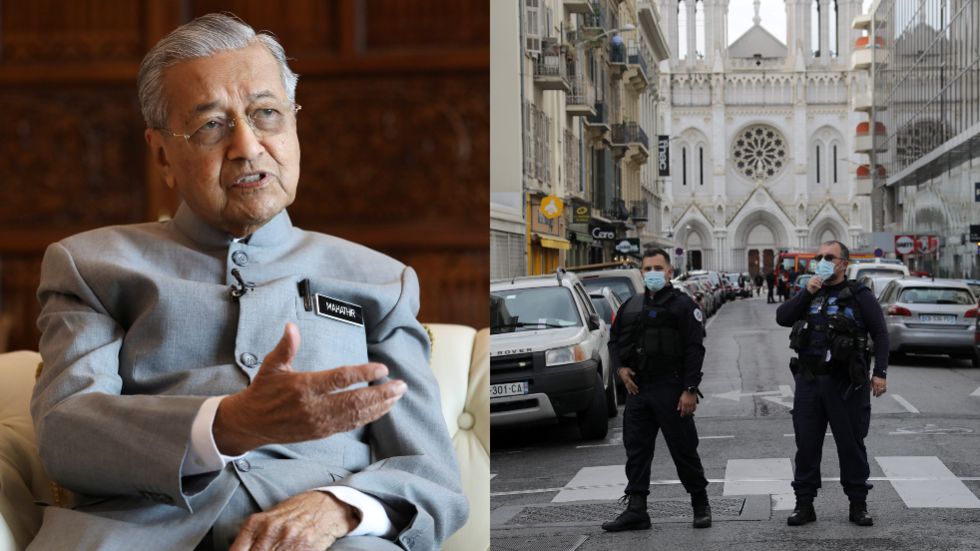 France was left reeling on Thursday from a series of apparent terrorist attacks. A knife-wielding man shouted “Allahu akbar” as he slaughtered three people in a church in Nice; police in Avignon shot another knifeman dead as he lunged for them shouting the Arabic slogan; and in Saudi Arabia, police arrested a man who stabbed a guard outside the French consulate in Jeddah. All three attacks come amid a countrywide crackdown on Islamic extremism, launched after a teacher was beheaded in Paris for showing students a caricature of the Prophet Mohammed.

Former Malaysian Prime Minister Mahathir Mohamad took to Twitter seemingly in a bid to defend the attackers. “Muslims have a right to be angry and to kill millions of French people for the massacres of the past,” he wrote, without elaborating on which “massacres” he meant. In a rant spanning multiple tweets, Mohamad added that “the Muslims have a right to punish the French.”

12. Muslims have a right to be angry and to kill millions of French people for the massacres of the past.

Mohamad called French President Emmanuel Macron “very primitive” for blaming the teacher’s beheading on “the evil that is radical Islam,” and demanded the French government “teach their people to respect other people’s feelings,” or risk Muslims applying “the ‘eye for an eye’ law” – which he said they “by and large” have not applied yet.

But by and large the Muslims have not applied the “eye for an eye” law. Muslims don’t. The French shouldn’t. Instead the French should teach their people to respect other people’s feelings.

The former PM did include a watery condemnation of the beheading, calling it “not an act that as a Muslim I would approve.”

Mohamad has landed himself in trouble for inflammatory comments before, including his remarks on “hook-nosed” Jews and for defending his country’s prosecution of gay people. His comments on France triggered another wave of condemnation, but some pundits were also outraged at Twitter for allowing his tweets to remain online, despite censoring US President Donald Trump and banning links to damaging information about his election opponent, Joe Biden.

Former Malaysia PM can call for mass murder on Twitter, and he’s fine by @jack. But the New York Post is still locked out of its Twitter account for reporting on Hunter Biden’s laptop. https://t.co/TnL3lqFtia

During a hearing in Washington, DC, on Wednesday, Twitter CEO Jack Dorsey defended his platform’s censorship of Trump and his supporters. When asked why Twitter removed tweets by the president about mail-in voting but allowed Iran’s Ayatollah to post threats to Israel, Dorsey replied that Trump’s comments “can cause more immediate harm.”

Mohamad served twice as Malaysia’s prime minister, from 1981 to 2003 and again from 2018 until his resignation in March 2020. While his comments were notably extreme, current leadership in the country has also taken a dim view of Macron’s crackdown. Earlier this week, the country’s foreign ministry summoned the French ambassador in Kuala Lumpur, telling him that Macron’s defense of the right to publish offensive cartoons constituted “inflammatory rhetoric” and “provocative acts that seek to defame the religion of Islam.”