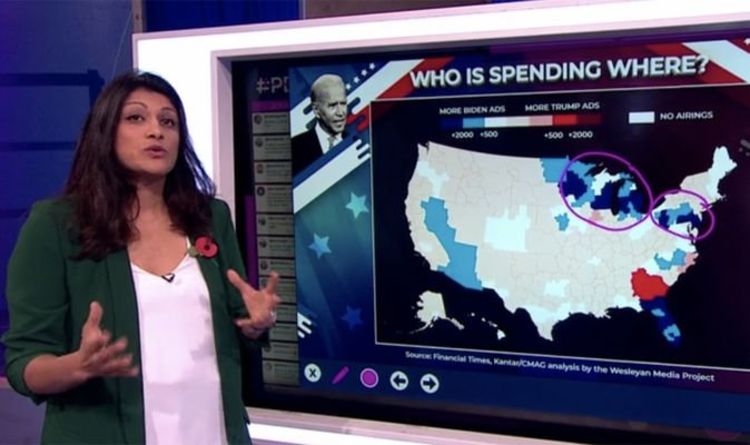 Americans will go to cast their vote next Tuesday for the next US President in a race between Joe Biden and Donald Trump. However, a shock political map has drawn a stark similarity between Joe Biden’s campaign this year and Jeremy Corbyn‘s doomed campaign in the UK general election last year. Anushka Asthana told ITV’s Robert Peston that Joe Biden is facing the “same challenges as Labour is here in the UK”.

Ms Asthana used a map showing where the Democratic and Republican parties are spending money ahead of the vote.

She said: “The blue on the map shows some similarities in the challenges facing the Democrats in the US and Labour here in the UK.

“We talk about the Red Wall but these three states – Michigan, Pennsylvania, Wisconsin – make up what was known as the blue wall until Trump won them in 2016.”

She continued: “The dark blue on the map shows you that Joe Biden is desperate to rebuild that wall.

“But the money is also going elsewhere, telling another story. Here in Arizona, Democrats are spending big.

“It is a traditionally Republican state, but it is becoming younger, more diverse and more liberal and the Democrats are gunning for it.

“I don’t think Arizona is that similar to Canterbury – definitely less of a desert in Kent – but they represent a similar trend.

Ms Asthana added: “Joe Biden has to win back these Blue Wall heartlands.

“Democrats like Labour are trying to appeal simultaneously to two different kind of voters at once.”

The latest opinion polls show Joe Biden with a significant edge nationally, but his lead is tighter in battleground states.

A new Reuters/Ipsos poll showed Donald Trump had essentially moved into a tie with Biden in Florida, with 49 percent for Biden and 47 percent for the president.

A poll from CNN showed that Mr Biden has the support of 64 percent of the 75.5m voters who have cast early ballots in the election compared with just 34 percent who said they have voted for Donald Trump.