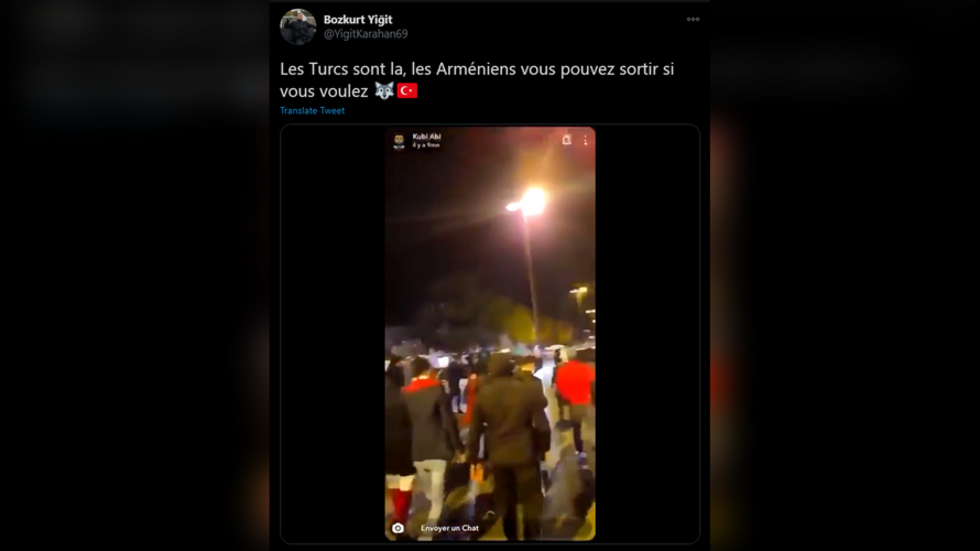 Turkish nationalists marched through the outskirts of Lyon, France, following violent clashes with ethnic Armenians who had blocked a roadway to show their support for Yerevan in its war with Azerbaijan in Nagorno-Karabakh.

Members of the ‘Gray Wolves’, a Turkish nationalist group, took to the streets of a Lyon suburb and a nearby commune on Wednesday night, after several Turks were reportedly injured earlier in the day by Armenian demonstrators.

France’s Independent Union of Police Commissioners said in a tweet that 150 “overexcited individuals” had participated in a “punitive expedition in search of Armenians” in Vienne, a commune 35 kilometers (22 miles) south of Lyon. Footage posted to social media shows a group of people shouting and waving Turkish flags while moving through Vienne, as a police cruiser retreats.

The group also filled the streets of Decines, a suburb of the southeastern city.

In one video, the mob can be heard chanting, “Allahu Akbar”, “Where are the Armenians?” and “F**k Armenia, we’re going to f**k you,” French media reported.

The unrest comes hours after hundreds of ethnic Armenians blocked the A7 motorway connecting Lyon and Marseille, as part of a protest against Azerbaijan and Turkey’s military actions in the disputed Nagorno-Karabakh region. Scuffles later broke out, with Turkish media claiming that commuters, some of them Turkish nationals, were blocked from passing through.

Several people sustained injuries during the clashes, according to media reports.

Armenia and Turkey are fierce rivals, not least because of the bitter 20th-century legacy of the genocide of Armenians by the Ottoman Empire – which killed an estimated 1.5 million people – but also due to Ankara’s long-standing military and political support for Azerbaijan.

Also on rt.com After 3rd ceasefire fails in Nagorno-Karabakh, Armenia & Azerbaijan blame violations on each other, report casualties

War broke out between Armenia and Azerbaijan over the disputed Nagorno-Karabakh region last month, with both countries accusing each other of using military aggression and shelling civilians. Turkey has been a vocal supporter of Azerbaijan in the conflict and has faced accusations of providing direct aerial support to Baku, as well as sending Syrian militants to the region. Ankara has denied the allegations.

The mainly Armenian-populated region of Nagorno-Karabakh, which is internationally recognized as part of Azerbaijan, unilaterally declared independence from Baku in the early 1990s and has since been backed by Armenia. Azerbaijani authorities, who consider the area illegally occupied by Yerevan, have vowed to regain control over it.