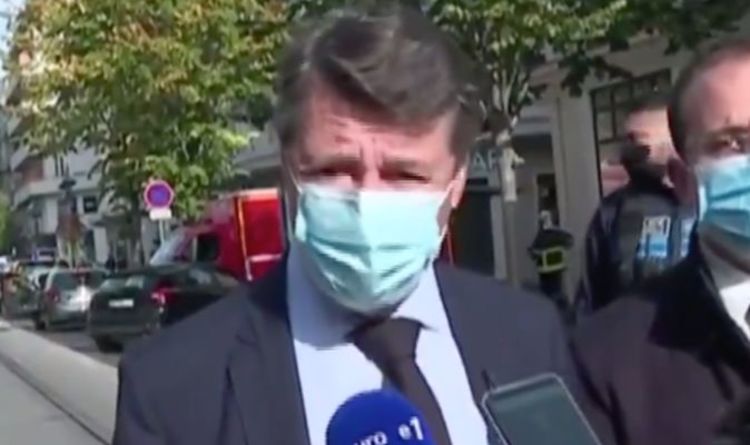 Nice plunged into terror on Thursday morning after a man attacked and killed at least three people near the Notre Dame Basilica in the city centre of the southern France city. Nice Mayor Christina Estrosi condemned the incident as a “terror attack” shortly after the news broke as he called for “definite action.” Mr Estrosi has also called for all churches in the city to be shut down to avoid additional attacks as religious tensions in the country reach new highs.

Mr Estrosi insisted additional security measures will also have to be introduced to allow for the safe discharge of religious events.

The mayor confirmed the attacker was “shot down by municipal police” shortly after the attack begun at around 9am (8am GMT).

He also added: “It seems that, according to the first findings of the police, one woman who was inside the church has been decapitated.

“For the other victims, we cannot say anything at the moment.”

Neither the identity nor the motives of the attack are known but it comes at a time of great religions tension across France.

On October 16, teacher Samuel Paty was beheaded after showing cartoons about the Prophet Mohammed to his class during a discussion on free speech.

The killing resulted in a wave of support for Mr Paty across France and from satirical magazine Charlie Hebdo, which lost several staffers in a terror attack because of the publication of controversial cartoons mocking Islam.

But the reaction of the French people sparked the ires of Turkish leader Recep Erdogan, who called on his people to boycott French products in protest.

Mr Erdogan claimed Muslims are being “subjected to a lynching campaign similar to that against Jews in Europe before World War II.

“European leaders should tell the French president to stop his hate campaign,” he added.

But European leaders have expressed their firm commitment to supporting France in its efforts to defend secularism and the clear division between Church and State.

Father Hugues de Woillemont, the chairman of the Bishops’ Conference of France, condemned the attack and said “Christians must not become a symbol to strike down.

“We are moved, very touched and in a sort of astonishment at this kind of unspeakable act.”

French Council of the Muslim Faith president Mohammed Moussaoui reacted to the Nice attack by urging the Muslim community to cancel celebrations for Mawlid, the annual feast marking the birthday of the prophet Muhammad.

Mr Moussaoui told FranceInfo: “This information which broke our hearts led me to call this morning the Muslims of France to cancel all the festivities of the feast of Muhammad.”

Richard Ferrand, the president of the National Assembly, learned about the horrific attack while Parliament was in session and called for a minute of silence.

Mr Ferrand said: “We have just heard that an attack of extreme gravity has taken place in Nice.

“In these tragic circumstances, I urge national representatives to observe a minute of silence to pay tribute and express our solidarity to the victims and their families.”

President Emmanuel Macron will be travelling to Nice to meet authorities at the emergency response centre on Place Beauvau.