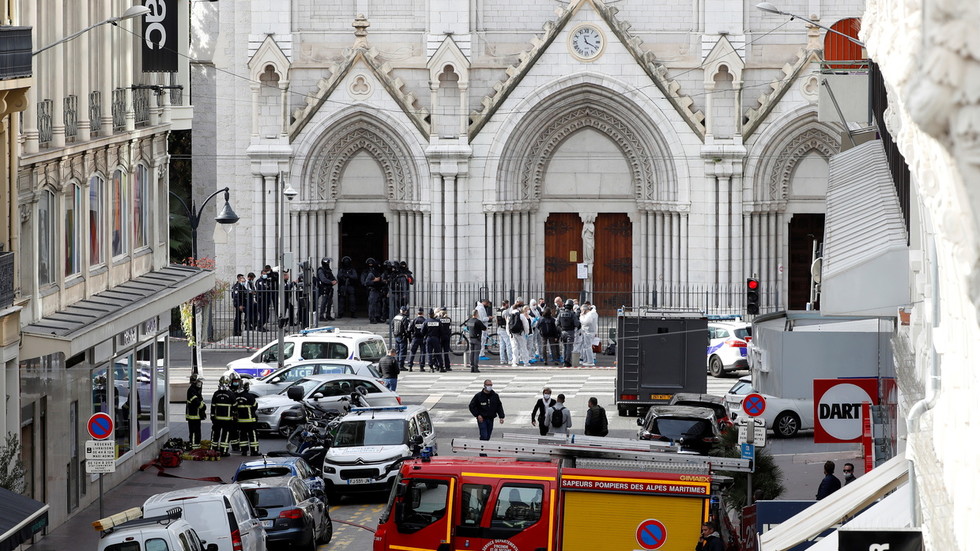 One of the victims in the Nice attack at a church on Thursday morning had their throat slit, local officials have confirmed to AFP. A terrorism probe was opened as three people died in the stabbing.

According to AFP, officials have provided more details regarding Thursday morning’s attack, which is now being investigated as terrorism. It is said that at least one of the three victims had their throat cut by the knifeman. Local media also reported that two of the victims – a woman and the church keeper – were killed inside the church, while another woman managed to escape but later succumbed to her injuries.

It was also reported that several more people were injured. Meanwhile, the media speculated, citing unconfirmed reports, that at least one of the victims was beheaded.

The Mayor of Nice Christian Estrosi called the attacker, who was injured and arrested at the scene, “Islamo-fascist,” and told reporters that the man kept repeating ‘Allahu Akbar’ “even while under medication.”

Estrosi confirmed that the victims had been killed in a “horrible way,” adding that “the methods match, without doubt, those used against the brave teacher in Conflans Sainte Honorine, Samuel Paty,” a reference to the schoolteacher beheaded on October 16.

The French government has engaged in a crackdown on extreme Islamism following the murder of Paty, believed to be revenge for the teacher showing Charlie Hebdo’s cartoons of Islam’s Prophet Mohammed to his class.