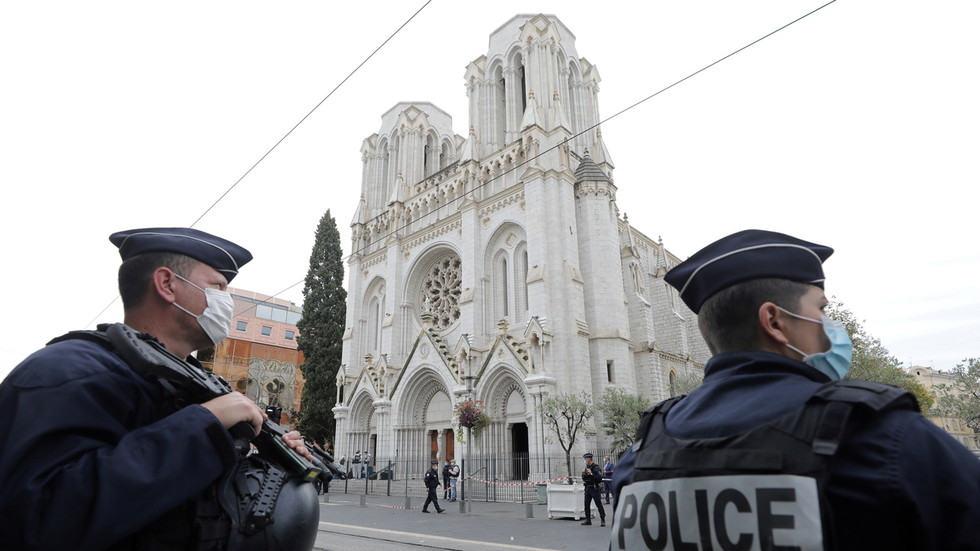 Authorities within the Catholic Church in France have condemned the suspected terrorist attack at a church in Nice and offered their condolences to the victims and their families.

The Conference of Bishops of France (CEF) described their “immense sadness” in the aftermath of the attack and described terrorism as a “gangrene to be stopped.”

The bishops said the incident was reminiscent of the killing of Fr. Jacques Hamel, who was murdered by two jihadists from Islamic State (IS, formerly ISIS) while he was celebrating mass in 2016. Fr. Hamel was labeled a martyr and is on course to be declared a saint after Pope Francis waived the traditional five-year waiting period.

The bishops’ organization also announced that a death knell for the victims will ring out in churches across France at 3pm local time on Thursday. They invited Catholics to pray for the deceased and their families.

Three people were killed during the incident in the Notre-Dame area of Nice which prompted authorities to move France’s national terrorist alert system to the highest level.

“We are moved, very touched and in a kind of astonishment at this kind of unspeakable act,” Father Hugues de Woillemont, spokesperson for the CEF, told AFP, adding that Catholics must not become a target for terrorist atrocities in the country.

“There is an urgent need to combat this gangrene that is terrorism, in the same way that there is an urgency to put in place in a concrete way a fraternity in our country,” he said.

Pope Francis expressed his solidarity with the victims and their families and called for the French people “to respond to evil with good.”

“I am close to the Catholic community of #Nice, mourning the attack that sowed death in a place of prayer and consolation,” the pontiff tweeted.

“I pray for the victims, for their families and for the beloved French people, that they may respond to evil with good.”

Mere hours after the attack in Nice, police officers in southeastern France were confronted by an assailant in Avignon. A knifeman also attacked a French consulate in Jeddah, Saudi Arabia.

The Nice church attack was also condemned by leaders in France’s Muslim community. Abdallah Zekri, director general of the French Council of Muslim Worship (CFCM), called on Muslims to cancel planned festivities in honor of Mawlid, or the Prophet’s Birthday, which ends Thursday, to show solidarity with the victims of the attack and their loved ones.

“As a sign of mourning and solidarity with the victims and their relatives, I call on the Muslims of France to cancel all the festivities of the Mawlid feast,” the CFCM tweeted.

“I can only denounce as strongly as possible this act of cowardice against the innocent,” Zekri added.

Also on rt.com Nice knife attack happened INSIDE the church, as local priests say they were warned – reports