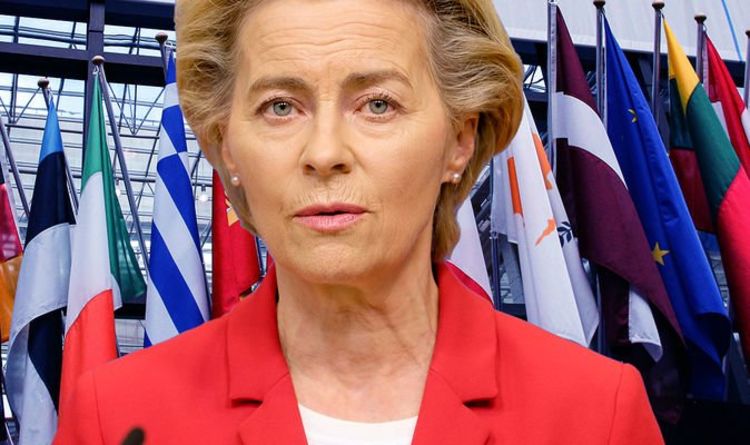 Senator Dick Durbin has praised the “new Europe,” hailing Brussels for its expansion of the European Union. Senator Durbin holds the second-highest position in the Democratic leadership in the US Senate as Senate Democratic Whip. Speaking to Robert Peston on ITV, the US senator’s flattery of the European project will be interpreted as a veiled swipe to Britain, which left the bloc earlier this year.

Mr Peston quizzed Senator Durbin on whether a Joe Biden presidency would have a closer relationship with Britain or the European Union.

“We have had a long, strong relationship, certainly since World War 2, with the UK. I want that to continue.

“We also have an emerging relationship with the new Europe, which has expanded, bringing in more countries into the EU.

“As far as I am concerned we all have a common purpose and can work together.”

JUST IN: US political map shows why Joe Biden might copy Corbyn’s Labour

He went on to say that Joe Biden’s first phone call as US President should be to America’s European allies, after claiming Donald Trump had “abandoned” them.

Over the weekend, the UK’s former ambassador to the US, Sir Ivan Rogers, told The Observer that Prime Minister Boris Johnson was waiting for the US election before deciding whether to leave the EU without a deal.

Downing Street rejected this claim and insisted the UK was attempting to intensify talks to agree a deal.

There is concern that Mr Biden will snub the UK, due to Mr Johnson’s public friendship and alliance with President Trump.

Mr Osborne said: “I don’t think Joe Biden will feel particularly warm towards this British Government and they’re going to have to work very hard to change that.”

Former diplomat and cross-bench peer, Peter Ricketts claimed this week that Germany and France will become the centre of gravity for the US if Joe Biden wins next month’s election.

The former National Security Adviser and ambassador to France claimed Britain will not be as important for the US.

Brexit Party founder Nigel Farage stumped for Donald Trump yesterday, praising the US President as “the bravest person I have ever met”.