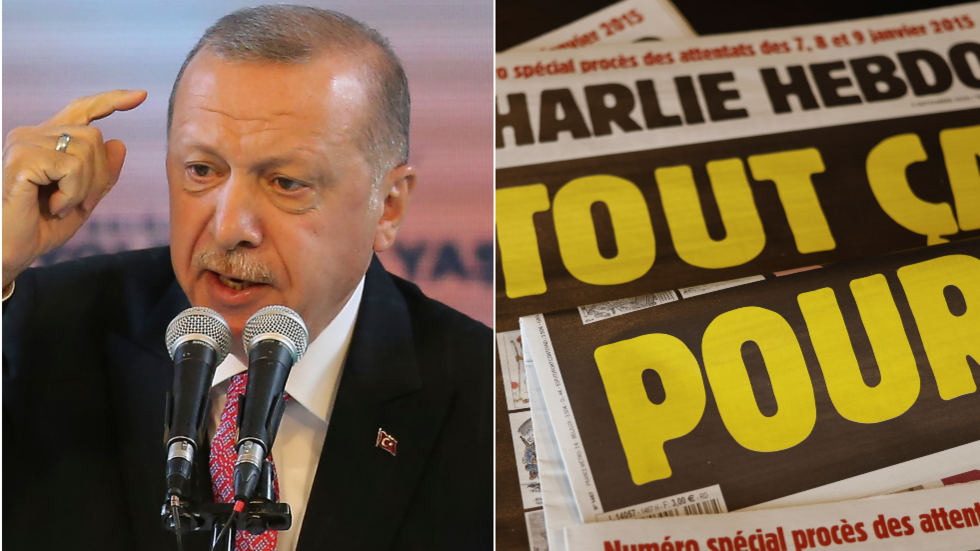 Ankara has accused Charlie Hebdo of promoting hatred after the French satirical magazine published a front-page caricature of President Recep Tayyip Erdogan, amid cultural tensions between France and Muslim countries.

The cartoon shows the Turkish leader lounging in his underwear with a can of beer in his hand as he lifts up the skirt of a woman wearing a hijab, exposing her backside.

Turkish Vice President Fuat Oktay blasted the magazine for the cover art, calling on the international community to “speak out against this disgrace.”

“You cannot deceive anyone by hiding behind freedom of opinion! I condemn the immoral publication of the inexcusable French rag about our President,” he tweeted.

The country’s communications director, Fahrettin Altun, went a step further by suggesting that the magazine had been emboldened by the French government.

“French President Macron’s anti-Muslim agenda is bearing fruit! Charlie Hebdo just published a series of so-called cartoons full of despicable images purportedly of our President. We condemn this most disgusting effort by this publication to spread its cultural racism and hatred,” he wrote.

In a series of follow-up tweets, the spokesman reiterated that Turkey opposes “any acts of terrorism in the name of Islam.”

“However, we will not remain silent in the face of disgusting attacks on our culture and religion no matter where it comes from,” Altun vowed.

The so-called caricatures are loathsome and they are devoid of any real sense of human decency. It’s clearly the product of a xenophobic, Islamophobic, and intolerant cultural environment the French leadership seems to want for their country.

The provocative magazine cover comes amid an ongoing verbal fracas between Erdogan and French President Emmanuel Macron, following the shocking murder of French schoolteacher Samuel Paty, who was beheaded by a Chechen refugee after the local Muslim community denounced him for teaching a lesson on freedom of expression which included Charlie Hebdo cartoons of the Prophet Mohammed.

Macron has cracked down on Islamic extremism and has promised to uphold secular values, saying that France will “not give up our cartoons.” His comments prompted a harsh response across Muslim countries. Erdogan himself has questioned Macron’s mental capacity and called on his fellow countrymen to boycott French products.

Charlie Hebdo has been targeted for its incendiary cartoons in the past. In 2015, 12 people were killed when Islamist terrorists stormed the magazine’s offices in Paris. The magazine has since changed its location, with the new address being kept secret for security reasons. Earlier this year, Charlie Hebdo reprinted some of its cartoons. Shortly afterwards, a knife-wielding man injured two people outside the magazine’s former offices. The attack was branded as “an act of Islamist terrorism” by the French interior minister.