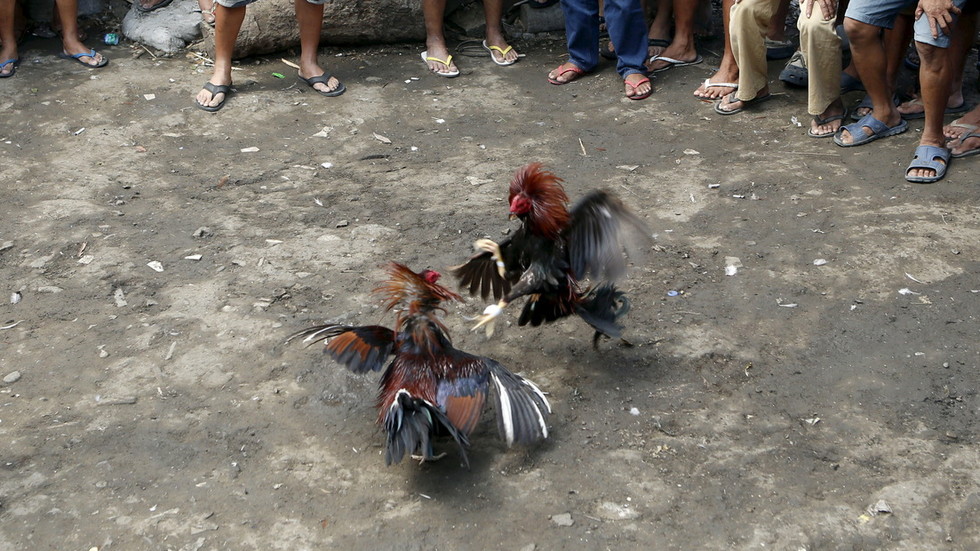 A Filipino police officer bled to death after a fighting cock slashed his femoral artery during a raid on an illegal event on the island of Northern Samar. Like other sports, cockfights have been officially banned due to Covid-19.

Lieutenant Christian Bolok was fatally cut in his left thigh when he picked up the rooster, which still had its fighting spurs – long, sharp blades – attached to its talons, during Monday’s raid on the illegal event in San Jose. Though he was rushed to a nearby hospital, Bolok, who served as police chief for the town, was declared dead on arrival, having bled to death from his wound.

Police Chief Colonel Arnel Apud described the grisly incident as “an unfortunate accident and a piece of bad luck that I cannot explain” during a press conference on Northern Samar.

“This is the first time in my 25 years as a policeman that I lost a man due to a fighting cock’s spur,” he continued, sending condolences to to Bolok’s family on behalf of the police department.

Also on rt.com Duterte seeks best Covid vaccine deal but ‘will not beg’ or allow private suppliers to rip off Philippines

Three men were arrested at the event, and police seized seven fighting cocks – including the murderous one – plus two sets of bladed spurs (called gaffs) and 550 Philippine pesos ($11). Three other attendees fled before they could be apprehended and remain at large. Inhabitants of Mandugang village reportedly called police to the scene on Monday to complain about the illegal gathering.

Cockfighting (also called sabong or tupada) is a billion dollar industry and a massively popular sport in the Philippines. Men often bet on the outcome of the deadly slashing matches between roosters. There are some 2,500 stadiums dedicated to the competitions nationwide, and an estimated 30 million cocks are killed annually during the miniature death-matches, drawing the ire of animal rights groups. There is even a cockfighting “Super Bowl,” called the World Slasher Cup, that takes place in Manila over a week in a 20,000-seat arena.

However, the sport has been banned due to the coronavirus pandemic, along with most recreational activities in the country. The provincial government of Northern Samar warned in August against attempting to hold cockfights illegally, claiming four people had caught the virus by attending an unlicensed fight.