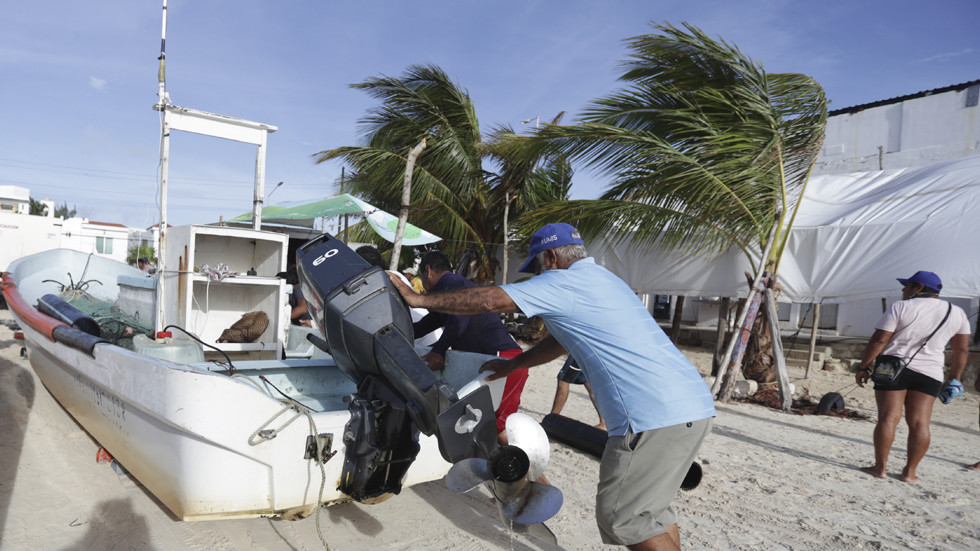 Hurricane Zeta has made landfall on Mexico’s Yucatan Peninsula, lashing the area with heavy rains and winds of up to almost 130 kilometers per hour.

Category 1 Hurricane Zeta, the 27th named storm of the current season, hit southern Mexico late Monday. Eyewitness footage from the area shows torrential rains flooding the streets as winds tore the roof off of one building, while ferocious lightning added to the apocalyptic scenes.

Meteorologists are warning that the storm surge is expected to raise water levels by as much as 60 to 120cm above normal tides, with up to 30cm of rain expected in parts of the Yucatan Peninsula and the Cayman Islands, as the hurricane heads northwest toward the US at a speed of approximately 20kph.

2020 has already witnessed a highly active hurricane season, with 27 named storms making landfall so far, just one short of the 2005 record of 28.

An average tropical season sees six hurricanes and 12 named storms, and Zeta is the 11th hurricane of the Atlantic season.

Governor John Bel Edwards declared a state of emergency in southern Louisiana, including the New Orleans metropolitan area, on Monday, and deployed around 1,150 National Guardsmen, along with a number of search and rescue boats and helicopters in anticipation of emergency operations.

“We must roll up our sleeves, like we always do, and prepare for a potential impact to Louisiana,” Edwards said.

Voluntary evacuations are underway for areas outside the New Orleans levee system while sandbags will be distributed to remaining residents on Tuesday. Authorities are encouraging residents to gather enough emergency supplies to last at least three days.

Hurricane Zeta is expected to slow before making landfall between the Mississippi River Delta and Mobile, Alabama, Wednesday evening.

This year’s wetter-than-average storms have also been moving slower, concentrating rainfall in a smaller area, much to the torment of the beleaguered Gulf States in the southern US.

In September, Alabama and the Florida Panhandle were drenched by Hurricane Sally, which crawled along at just 4.8kph, while dropping rainfall of up to 60cm in certain areas.

The region was then struck by Hurricane Delta just three weeks ago, which wreaked havoc on power supplies.