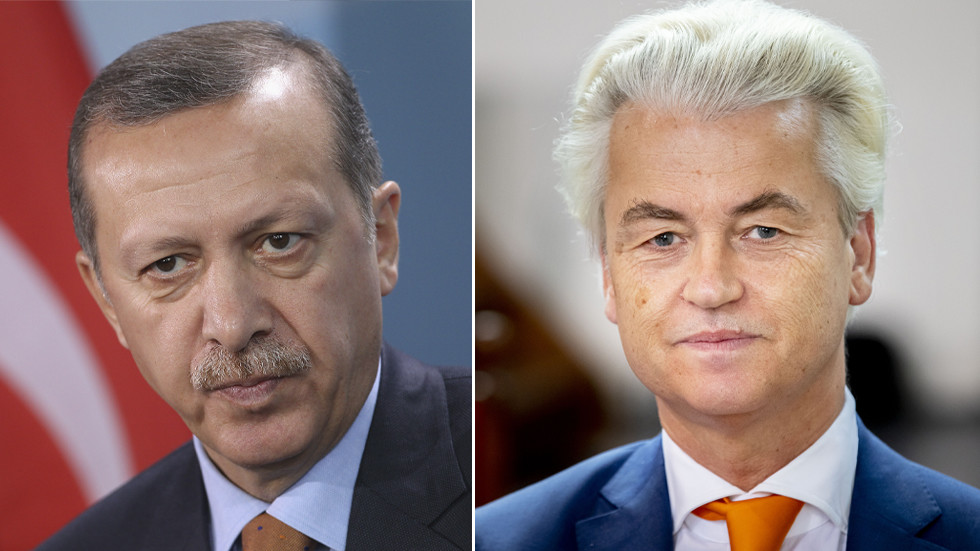 Turkish President Recep Tayyip Erdogan has filed a criminal complaint against Dutch right-wing leader Geert Wilders, after he insulted him on social media.

Wilders, the leader of the Dutch Party for Freedom, stirred outrage in Turkey on Saturday after he tweeted a cartoon of Erdogan captioned ‘Terrorist’. He followed up his public criticism of the country’s president with another tweet on Monday of a ship with a Turkish flag sinking, captioned ‘Bye bye @RTErdogan. Kick Turkey out of NATO!’.

Erdogan’s legal team filed a lawsuit with prosecutors in Turkey’s capital, Ankara, claiming that Wilders violated a Turkish law that makes it illegal to insult Turkey, government institutions, or its national heroes, citing the 104th Article of the Constitution. The law, Article 301 of the country’s penal code, was brought into effect in 2005 and has been used repeatedly by the president to prosecute critics.

Also on rt.com Muslims in Europe subjected to a ‘lynch campaign’ like Jews before World War II – Erdogan

A representative for Erdogan argued that, despite the law not specifically criminalizing insulting the president, “the value that is being violated is the state’s political government structure.” Wilders responded to the threat of legal action on Twitter by continuing to mock Erdogan, calling him a “fascist” and a “loser,” stating that the “world is upside down” if the Turkish leader is “now going to press charges against” him.

When truth spoken to their faces Europe’s loser racists showed up again. Trying to exploit Islamophobia and xenophobia. Time has come to stop Europe’s spoiled politicians with fascist mindset.

Wilders and Turkey have clashed in the past, as the Dutch politician has been accused of pushing anti-Turkish policies. In 2015, Wilders said Turkey is “not welcome” in the European Union, declaring the country would never be admitted to the bloc. During a 2017 televised debate, Wilders called for Turkey’s ambassador to be expelled after Erdogan called the country a “Nazi remnant.”

This is not the first time Wilders has faced legal trouble, despite his party being the second largest in the Dutch parliament. A couple of months ago, he was found guilty of insulting Moroccans. He was prosecuted after asking the crowd at a campaign rally in 2014 if they wanted more or fewer Moroccan nationals in the country.