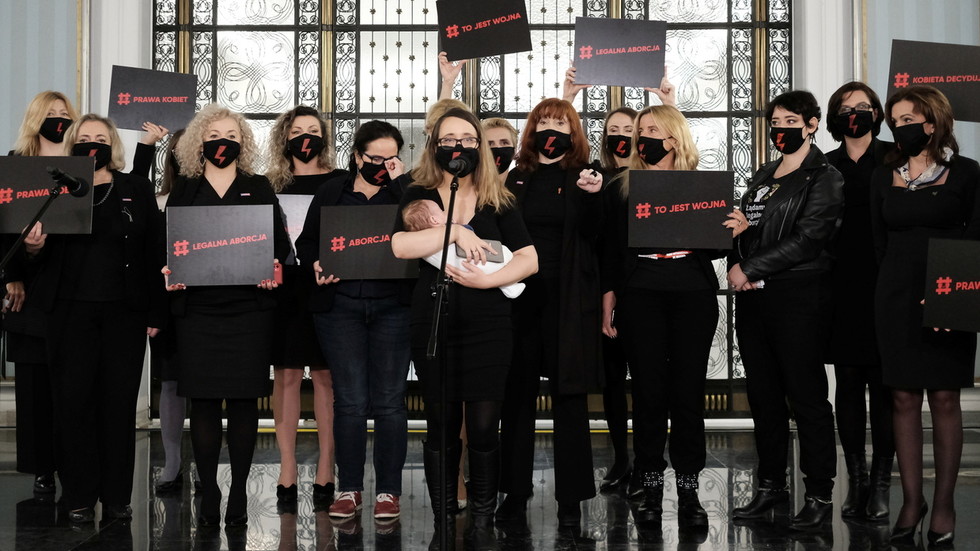 Polish MPs, who support a national pro-choice movement, staged an impromptu rally in the parliament’s chamber. Earlier, the deputy speaker compared them to Nazis for wearing the lightning strike symbol used by activists.

Poland is currently simmering with public anger over a recent court ruling, which virtually outlawed abortions in the country. A group of female MPs from opposition parties came to the Tuesday parliamentary session wearing black and with their faces covered by black masks with a single red lightning strike. The same clothing is used by the “Women’s strike” movement, which demands the liberalization of abortion laws and has staged numerous demonstrations in the last several days.

The MPs faced bitter contempt from the ruling Law and Justice (PiS) party, the driving force behind Poland’s ongoing drift to religious conservatism. Deputy Marshal Ryszard Terlecki had previously remarked that the lightning strikes on the protesting MPs’ masks reminded him of the “sig rune” of the Nazi insignia.

“I understand that the opposition refers to totalitarian patterns,” he said as he opened the session.

Later in the day there was a scuffle in the chamber, as the opposition politicians occupied the podium for an improvised rally. They chanted “shame” and “this is war” and carried banners with the slogans used by “Women’s strike”. PiS leader, Jaroslaw Kaczynski, who was present at the session, seemed to be the primary target of their ire.

Terlecki ordered the parliament guards to intervene, restore order and expel some of the protesters. Amidst the confusion, the deputy marshal even reportedly named late MP Izabela Jaruga-Nowacka among those not allowed in the chamber, probably mistaking her for her daughter, MP Barbara Nowacka.

Poland, a predominantly Catholic nation, has some of the most restrictive laws on abortion in the EU. Last week its top court prohibited terminating any pregnancy, unless it was a result of rape or incest, or posed a threat to the mother’s life. The court was also called to determine if a deformity of the fetus justified abortion and said no.

The ruling stirred public anger among pro-choice Poles, leading to a series of mass protests across the country. On Tuesday, Prime Minister Mateusz Morawiecki called on the demonstrators to stop, arguing that they posed a “massive risk” to public health due to the Covid-19 epidemic.

“These outbursts we are seeing in the streets should absolutely not be taking place. We will oppose any acts of aggression decisively,” he said.